April 10th. Me. Frisbee. Hiking. Mexico to Canada. Continental Divide Trail. 3,100 miles. It’s go time. Hammer down. 🤘
The fun wasn’t over after thru hiking the BMT. I met up with some more of my favorite people at Amicalola Falls to hike a section of the AT. It was an awesome #hikertrash tramily reunion. I’ve missed these fools! The weather wasn’t so desirable, but we managed to dodge the worst of it by hiding out in Blairsville where we ate copious amounts of food. We made it to Franklin and got to pay it forward by providing trail magic. I think I enjoy providing trail magic more than receiving it, and that’s saying A LOT! This gal loves to eat! Up next... New Mexico!!!
March 26th 2021 - BMT complete! All we had was a short hike to Ironbridge Cafe for breakfast and coffee. Frisbee and I were stoked that Dr. Thunder showed up. He came in clutch shuttling us from Skeenah Gap to Blairsville to dodge the upcoming storm. Our zero day paid off and we had sunshine the entire 25 miles to the finish line!
We picked up “Grandpa” and hiked a pretty stretch of trail to a sweet campsite. Frisbee and I had our “unofficial” finish once we reached the Pinhoti Trail junction. Then we spent the night in a cemetery and Middle Brother nearly got shot by the hunter he startled the next morning. After a road walk, we slept at Indian Rock Shelter so we could get an early hitch into Blue Ridge to destroy McDonald’s. Most of us were out of food.
After an awesome visit to Reliance Fly and Tackle for coffee and food, we got to explore the rest of Reliance during our road walk. We picked up resupply and Grandpa at Ducktown the next day and enjoyed the sunshine... finally!
We escaped the rain by hiding in Ducktown, but the aftermath was flooded trail and a dangerous ford. We all made it across safely, including Lucy Lulu (a NOBO hiker we met at the crossing). It was still a pretty section and it included random goats and a lot of snakes. (Some video/photo credits: @trevtrevorwhatever @middlebrothersworld )
We timed it perfectly walking into Tapoco Tavern on opening day! The rain also waited to unleash until we found cover. We ate well then slept in a gazebo for the night. The next couple days were brutal. I busted my ass on the slick trail, twice! 😑The climbs were rough, the humidity was high, and the fog was thick. After fording a few creeks, my feet were battered. Time for a zero day!
We were wrapping up the Smokies and the
Our hike through the #GreatSmokyMountains has been awesome! Aside from the natural, the #bmt had taken us to some #historic sites and #ruins. We explored the Calhoun House built in 1928, foundation ruins and a old #car graveyard.
Posted on June 30, 2019December 28, 2019 by Stubbs

When I peered out of the tent first thing in the morning, there were confused horses and mules staring back at me.

Wallace had plenty of coffee made for the three of us, and we talked with him under the car port before Judy invited us inside for cinnamon rolls. Wallace informed us that they came out of a can and Judy yelled at him, jokingly,

“Why’d you tell them that! I wanted them to think they were homemade!”

They gave us the grand tour of their home, which Wallace built with his own two hands from the ground up. He showed me the secret door that led to the middle of the barn in case there was a tornado, and pointed to pictures on the wall of his family. In particular, he pointed to his daughter’s wedding photo, and commented on the fact that she married another woman. He didn’t approve of the whole concept of gay marriage, but told me he supported and loved his daughter nonetheless. I told him frankly, “you don’t always get to choose who you love.” It was nice he could see past their disagreements. This isn’t so common from people who live along the ‘Bible Belt’.

He then pointed to the many pictures of his grandchildren and said, “They ain’t right.” This made me chuckle.

We dried out our gear in the sun, thanked Wallace and Judy for their excellent hospitality, and packed up our things. He gave us one last hoot and holler as he sent us on our way back to the trail.

We walked through Holland where the restaurant used to be.

“Don’t blink! You might miss it,” Frisbee said regarding the tiny town that only consisted of a few residential homes.

We were walking beside the road before it veered off onto a dirt path. Frisbee and I ended up missing our turn. Fortunately we were only about a quarter of a mile off route. There was evidence of ATVs cruising through the following section with tire tracks and mud holes throughout.

When we got to Highpoint Trailhead, we ran back into Spacejam who had gotten a head start in the morning, and we all ate second breakfast together. We had a climb ahead of us, but we were excited that there were lookout towers to look forward to, according to the guide. We caught a glimpse of one of them on the way up.

When we reached the top, the trail turned away from the direction of the lookout tower, which had me confused. Then I realized that the trail bypassed it altogether, and the so called “towers” we would be passing by were actually just a bunch of phone towers. A lot less exciting than the one we missed out on. I’m still not quite sure why the Pinhoti doesn’t cut over to the lookout tower. It would have been nice if it did.

This was going to be another dry stretch. I was low on water and the heat was cranking up. My feet were also revolting on me. We took a late lunch break in the middle of the trail before we made our way to Highway 27 at Mack White Gap. This was an incredibly busy highway, so we had to cross it, QUICKLY!

Back on the grassy trail we went. I was insanely dehydrated… and moody. A stream was coming up in a few miles, and I was determined to get there ASAP. Frisbee and Spacejam were walking a steady pace, but I was thirsty as hell and it wasn’t fast enough! So I flew up the hill and busted through the tall grasses, on a mission to for some refreshing, cold, stream water. I unintentionally chased a wild turkey on the way there before heading downhill to the water source.

When I got there, I chugged as much water as I could without choking. I was so thirsty, but now I was in heaven. I was elated and sprawled out on the trail by the time Frisbee caught up to me. Once Spacejam got there, we took another snack break and tried to motivate ourselves to continue further. We were beat. Spacejam lagged behind for a little bit as Frisbee and I pushed onward.

The next stretch was beyond frustrating. We made a wrong turn and were hiking downhill quite a while before we realized it. Once we climbed back up to the top and got back on track, I noticed that the logs that were laying on the trail to keep hikers going in the right direction were hidden underneath the tall grasses. When the trail and everything surrounding it is overgrown, it’s hard to decipher between the two. This hike has been mentally draining. 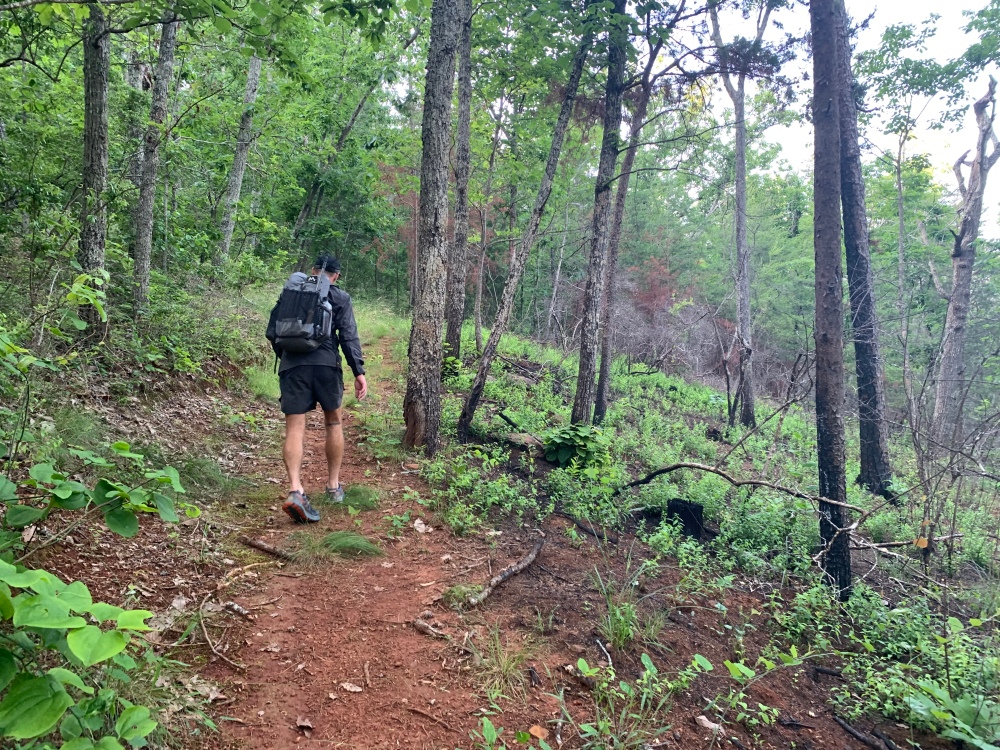 Once we were back on trail, we hiked through a burn zone, then we were relieved to be on a dirt road for a while. Relief returned to frustration once we reached a junction and the guide wasn’t any help. The GPS was split down the center between two directions, so it took us a lot of wandering back and forth until we figured out the correct path. This day was simply irritating.

We got back on trail at Hammond Gap and found that the tenting area that we had aimed for was hidden in the growth and very uneven. A lot of camp sites on this guide have been questionable. A number of them consisted of a large fire pit with nowhere to pitch a tent. Others were in overgrown, angled, or otherwise less than desirable locations. We walked a little further to a parking area by a gravel road near mile 240.8. It wasn’t great. There was shattered glass and abandoned clothing and boots scattered around the lot, but it was better than the last spot.

We filled up on water, pitched the tent and hopped inside to avoid the mosquitoes. It had been a horrible day. Spacejam showed up an hour after we settled in and I knew he felt the same way. He didn’t say a word.

Jump Ahead to The Pinhoti Trail: Part 14

Jump Back to The Pinhoti Trail: Part 12