It’s #tattoo season! Fresh #ink by the very talented @noalox Thanks buddy! Lovin’ it!❤️
Got me some fresh #ink by the very talented @noalox Solid work per usual and always awesome to see y’all! Thanks buddy! I’m lovin it!
44 miles in 17 hours (15 hours if you exclude all the breaks) with 7 hours to spare! 🤘 I finally got to complete the Four State Challenge on the #appalachiantrail About three years ago, I started treatment for my osteopenia 🦴. I’m grateful that I haven’t had a single fracture since, and that I can continue to do what I love! ❤️ This also wraps up our “One Year Section Triple Crown!”😂 We’ve hiked a section of the #continentaldividetrail (200 miles), #pacificcresttrail (22 miles), and now the #at Hammer down! 🔨 👇
Tuesday, September 8th, 2020 - That’s a wrap! 🤘 Dirty. Smelly. Satisfied! The #tahoerimtrail delivered, and we finished just in time! Today, we met some hikers that were forced off trail by officials due the the #wildfires 🔥 Sad to say goodbye to our trail brother, Dr. Thunder, and to our time on the west coast. Back to the grind til next year! 😭
The Desolation Wilderness was friggin’ amazing! Sadly, our hike would be coming to an end soon after, but this was a damn good send-off!
#nofilter No, really. That’s the color of the sky brought to you by the wild fires. 🔥 We took a nero day in South Lake so I could recover. Still incredibly dehydrated and ill. 😵 I feel like I’m having a multi-day hangover, and I don’t even drink anymore! This was what the trail looked like when we returned, and it was raining ash.
I was still severely dehydrated from the day before after an uncomfortable night at Heavenly. I drank as much water as I could stomach, but was only able to eat a meat and cheese stick during the 25 miles we hiked. On the bright side, we crossed the state line back into #california , I cooled off in #starlake , and it was beginning to look more and more like the #sierras 😍
We climbed to the highest point of the Tahoe Rim Trail, and the sky was clear for most of the day, but the smoke rolled back through later. So sadly, we missed out on Sand Harbor Overlook 😓The next day was a super dry stretch. I underestimated the 15 mile stretch after the water cache, which wound up being a very exposed section. Heat exhaustion and sun poisoning is no joke! I’m posting this days late, and I’m still suffering😵
Stoked the smoke cleared so we could see the lake as we started our first full day on the #tahoerimtrail We crossed the border into Nevada and entered the Mt. Rose Wilderness where we camped at Grey Lake for the night. A good start to a new trail if you ask me!
Posted on July 9, 2019December 28, 2019 by Stubbs

Right before re-entering the woods, I fell into a state of panic. Tomorrow we were going to complete our Pinhoti Trail thru hike, which should be something to celebrate. However, not knowing how we were getting out of the wood was on my mind. I couldn’t get over the fear of not having enough food and not being close enough to a busy enough road to hitch out of. We researched, but nothing came up specifically telling us where we’d run into the Benton MacKaye Trail or how far we’d be from a bailout point in case we ran out, and the Pinhoti Trail doesn’t end at a trailhead. It seems to end in the middle of nowhere and the app we had didn’t offer much help. Although we didn’t want to make any more stops, to solve our problem we decided to make another trip to town later in the day when we reached the last road crossing heading to a town. 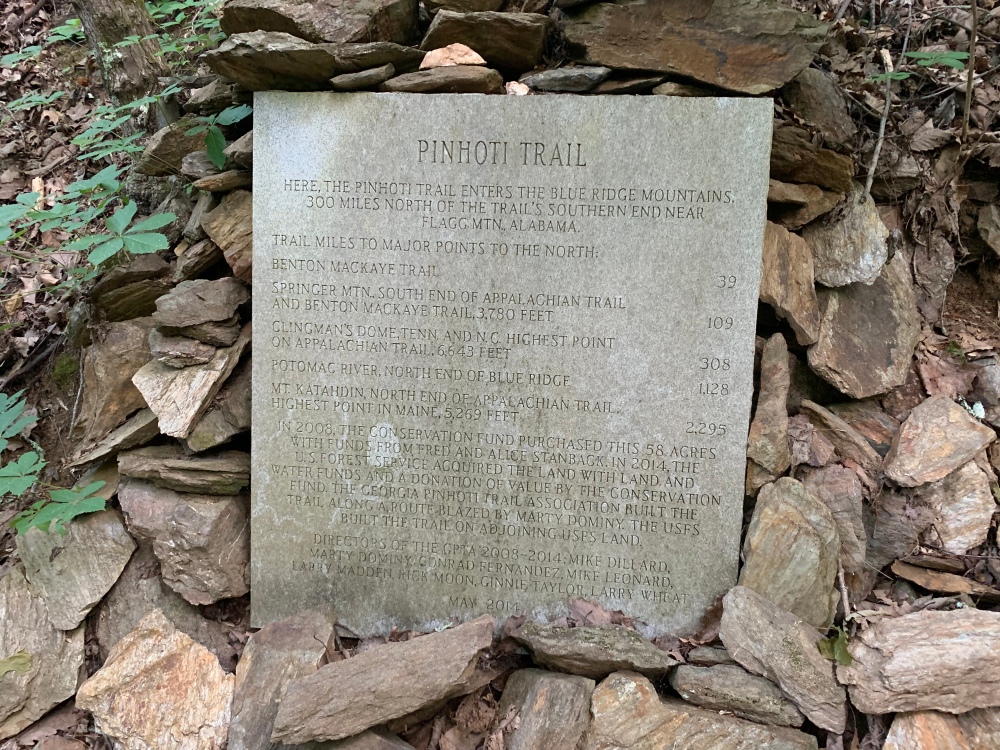 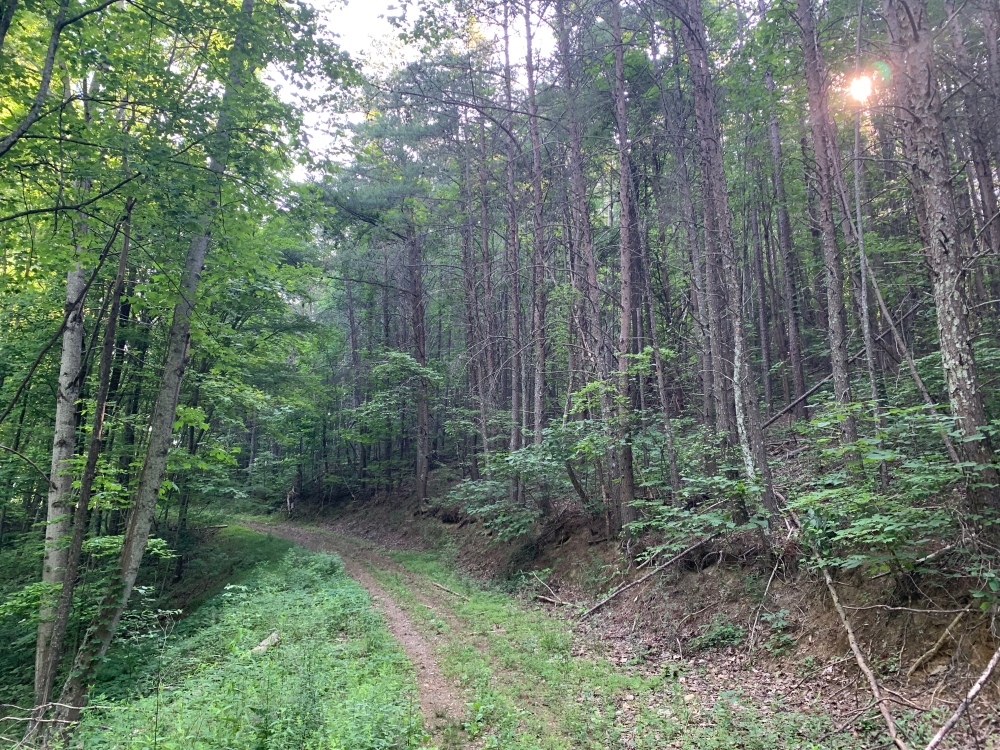 It was Memorial Day weekend, so we saw a few groups of people out and about as we followed forest roads. We saw a party by one of the streams then talked to a couple riding through the mud on a 4-wheeler. We crossed a couple streams then took a lunch break at a large tent site, picking the ticks off of our legs as we ate. 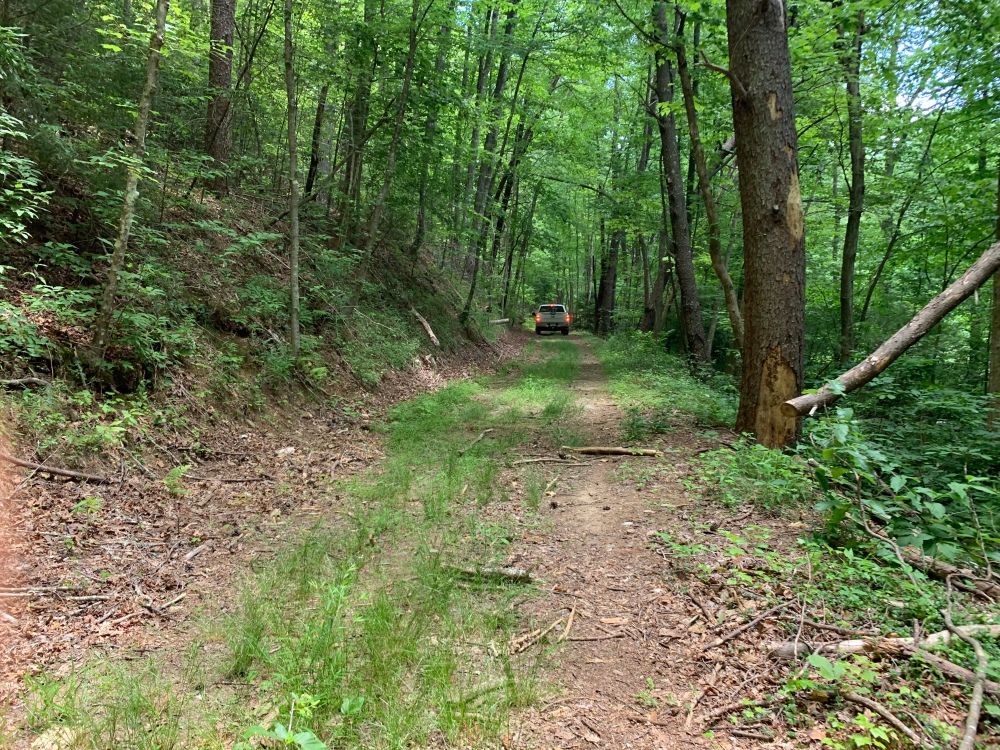 When we got going, a guy driving a truck on the trail, which usually isn’t legal to do, pulled up behind us. He stopped to talk and told us that he was the owner of the land ahead of us and was heading to the meadow to treat the grass. We let him pass by as he drove over fallen tree limbs and then went back around him when he had to unlock a fence to get through. He’d go around us once again, and we’d be relieved that he did. When we caught back up with him, his truck flattened the tall grass in the meadow which was shoulder length, well at least on me. A father/son mountain biker pair passed us from the other direction and likely appreciated it too! 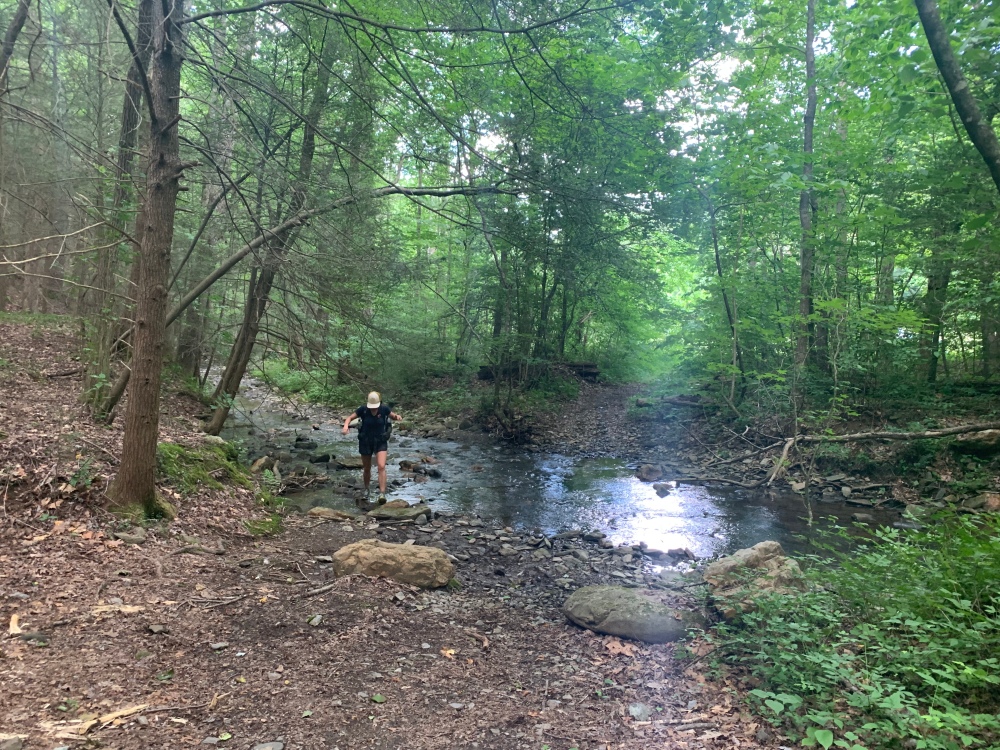 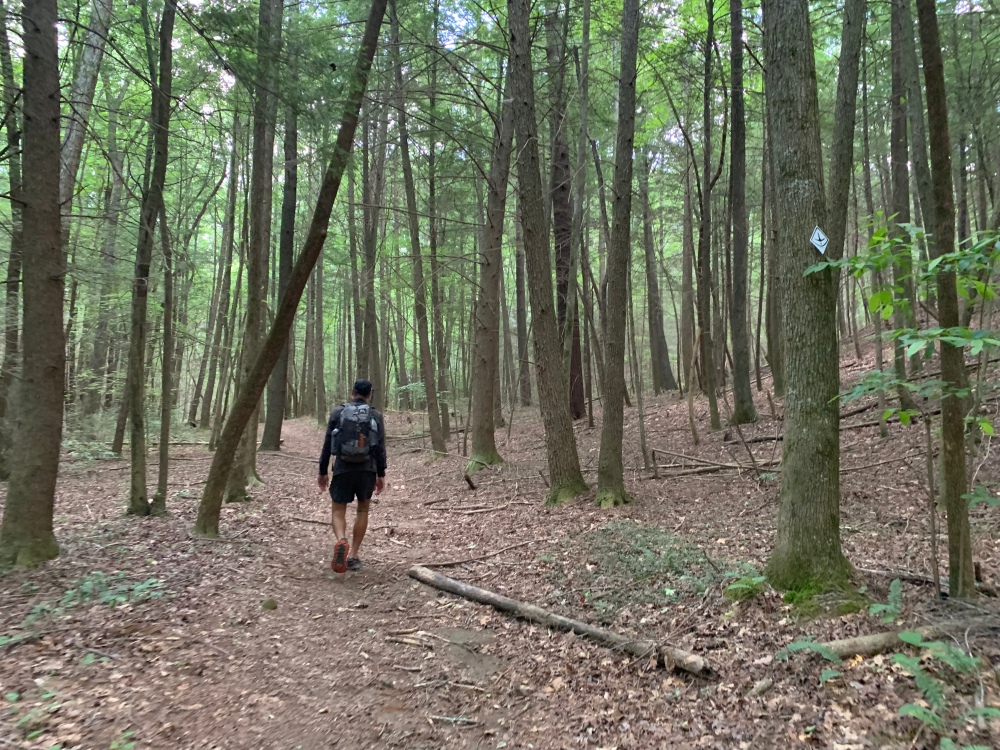 We hydrated at a stream before ascending the steep climb ahead.

On the way, we ran into a group of three fathers and their three sons who were starting a backpacking trip. They asked us some questions about being ultralight and told us how bad the trail was up ahead. We weren’t threatened, especially after showing them a few pictures of what we had already been through. They were shocked.

We were close to the road to Ellijay for our last resupply, but as we walked through a nice neighborhood along a forest road, we realized that we had gotten nearly a half mile off track. I rolled my eyes and we retraced our steps. I was pretty much done with this poorly marked trail and all the bushwhacking. I couldn’t wait to wrap things up. 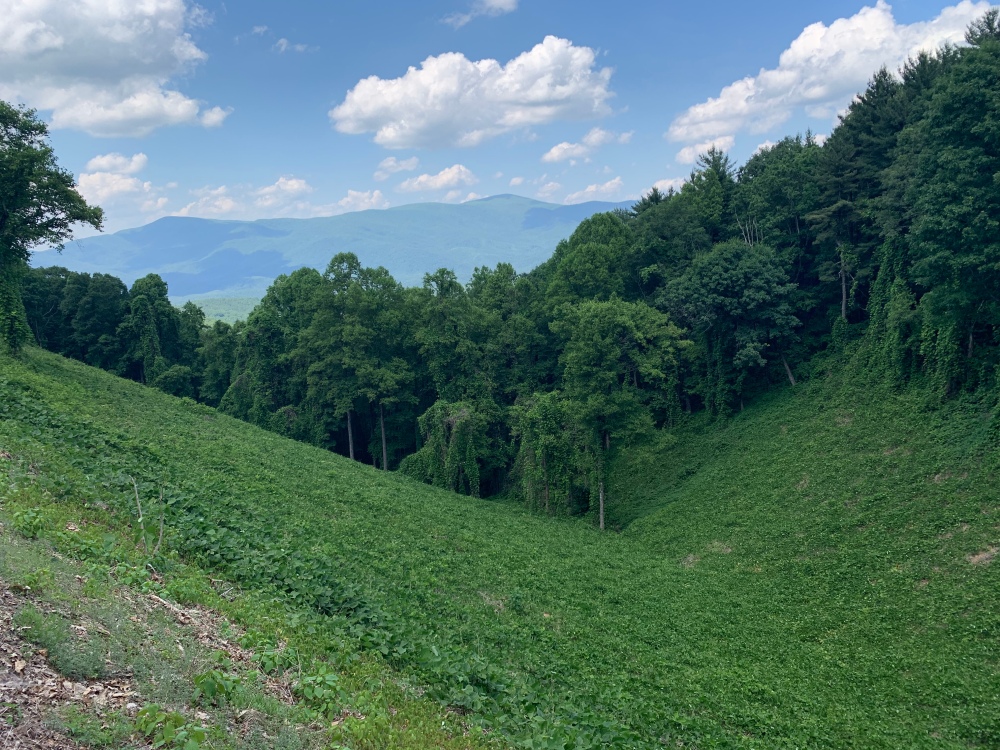 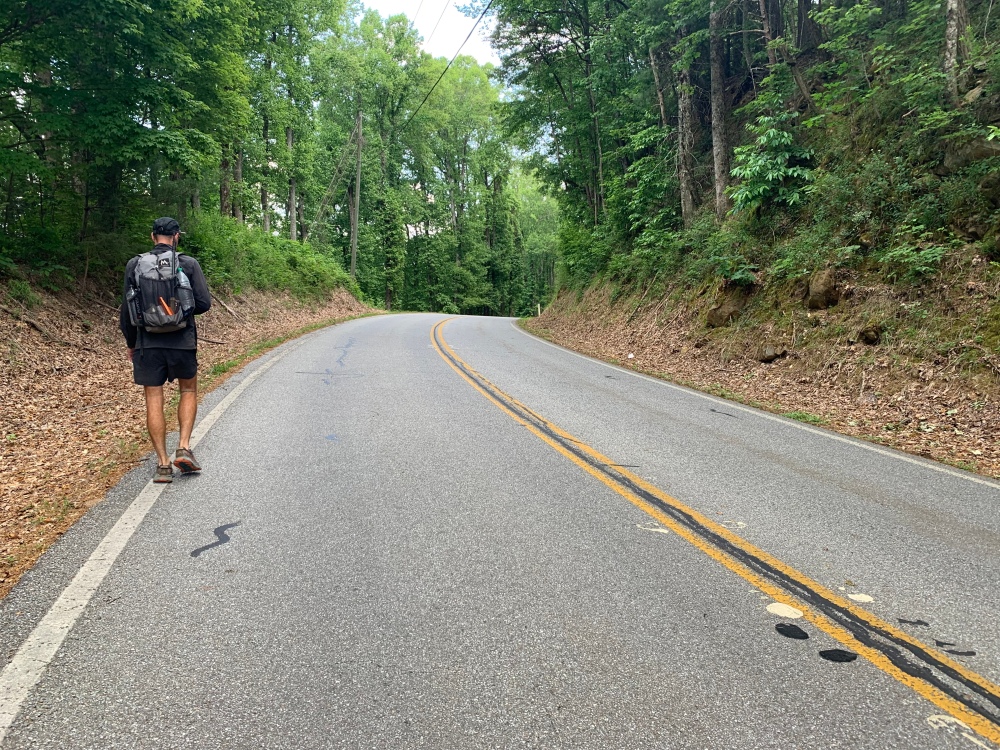 Eventually we reached the road that would take us to Ellijay, and got picked up immediately by a couple driving a pickup truck. They told us they didn’t have room in the back, but we could hop in the bed with their two kayaks. Of course, we didn’t mind. Their names were Dean and Linda and they informed us that they pick hikers up all the time. They took us to Dollar General and said they’d take us back to the trail once we finished resupplying! Here I was worried about losing time and these two trail angels hooked us up!

Once they dropped us off, we hiked a very fun and interesting switchback trail and we’d meet a few mountain bikers along the way. Minus a few fallen trees, the trail was well groomed and it curved and looped around in a way that you could see it in tiers. When we noticed a mountain bike retreat was close by, it all made sense. 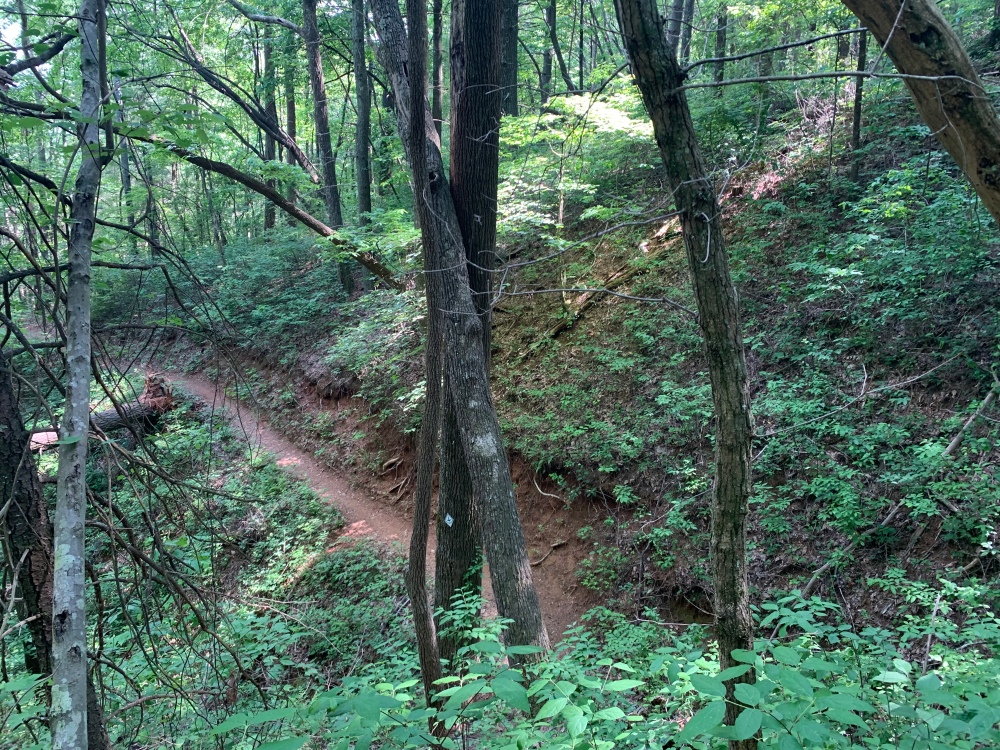 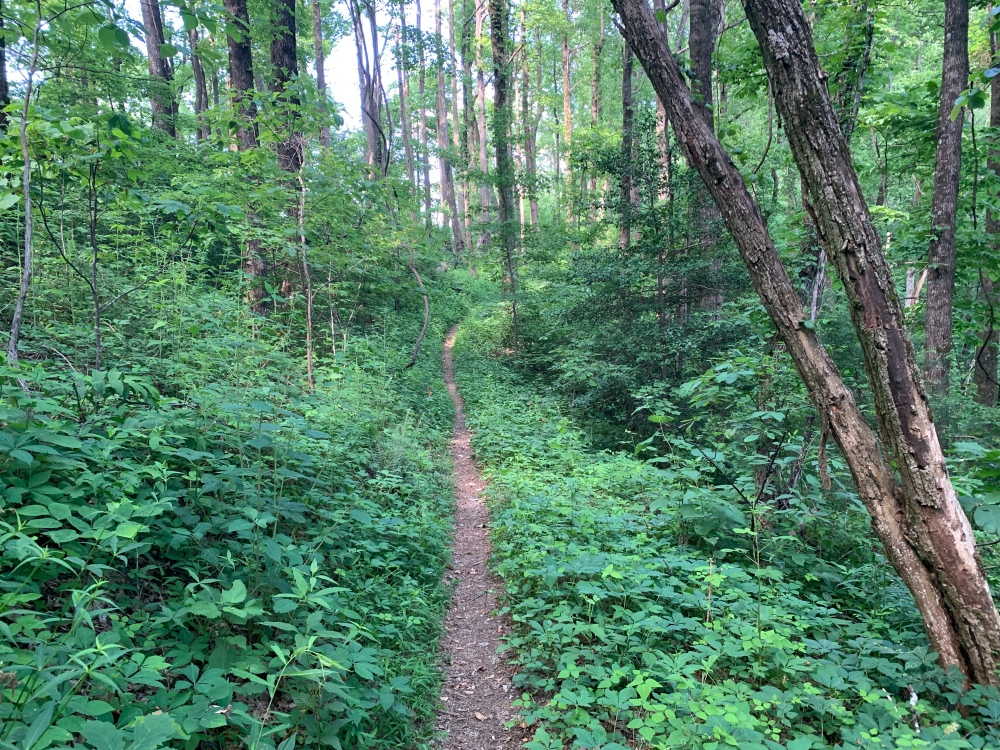 The Pinhoti spit us out on a dusty road. We got water at a less than desirable source underneath of it and followed it back to the woods. Some people who drove by were nice enough to slow down, but others kicked up dust in our faces as the flew by.

We cursed them, but since this was likely the last flat spot we’d be around for a bit, we decided to eat dinner there before reentering the forest.

We were grateful for that retreat as we strolled along a very well groomed trail covered in pine needles. There were steep climbs, but when you take bushwhacking out of the situation, it wasn’t bad at all. 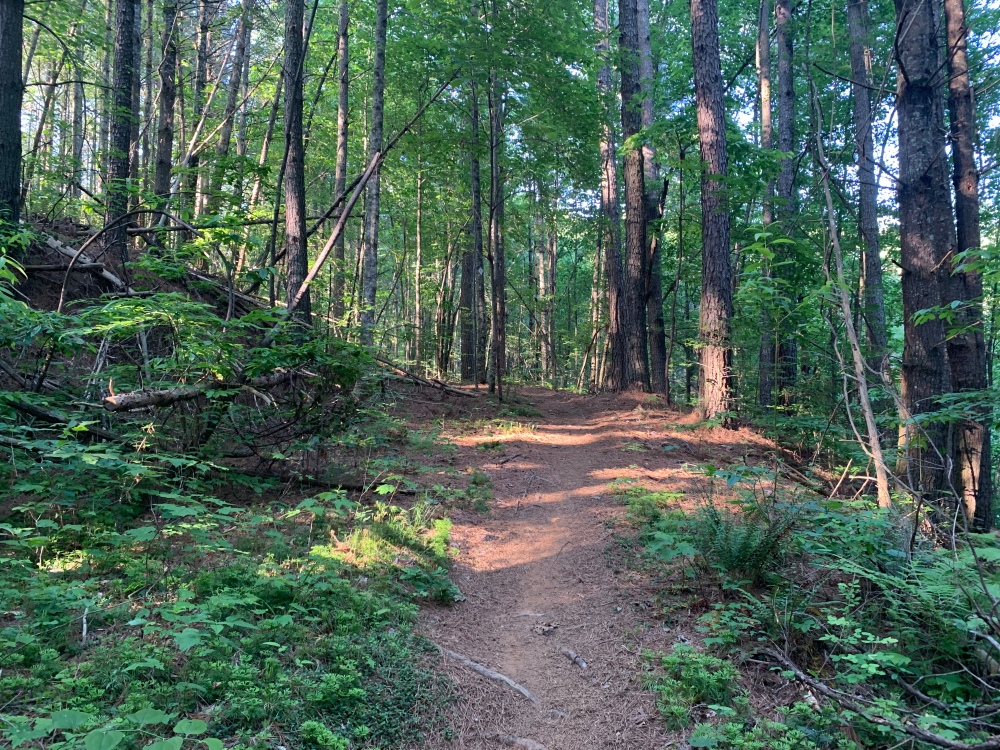 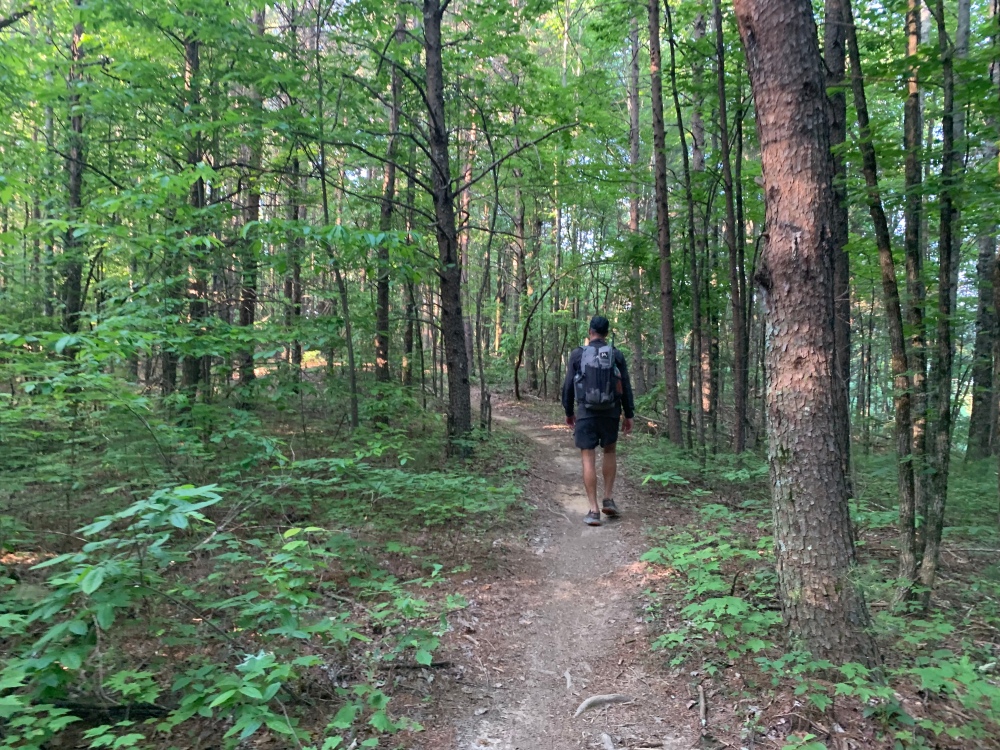 Eventually we were back on a gravel road. My feet were starting to hurt; they prefer the soft feel of soil over gravel and asphalt. 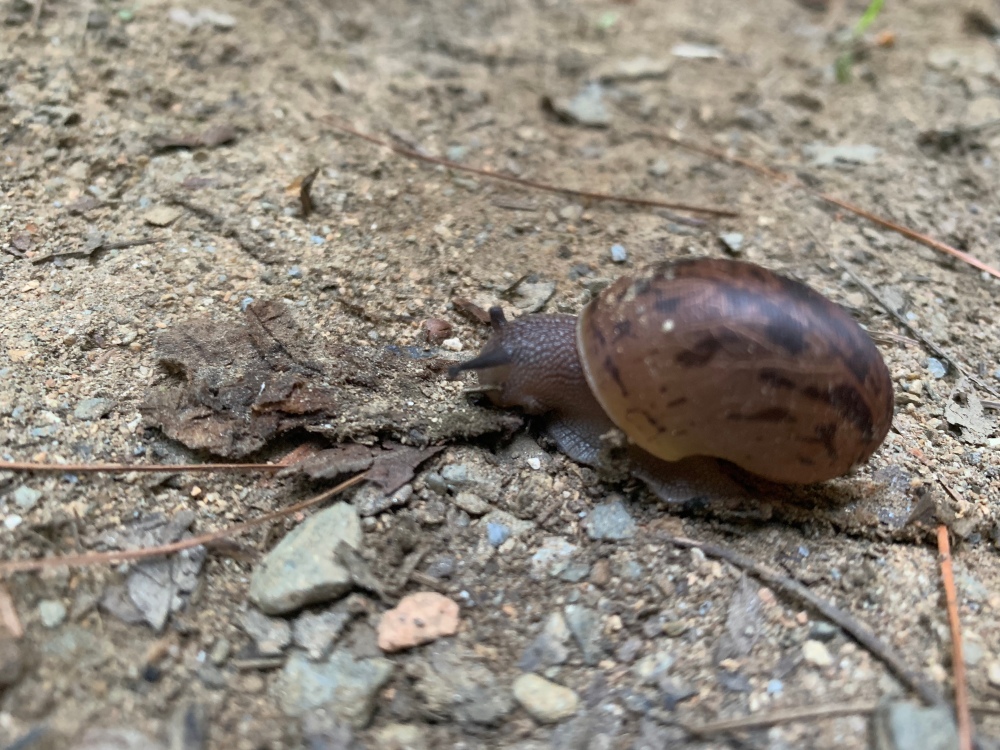 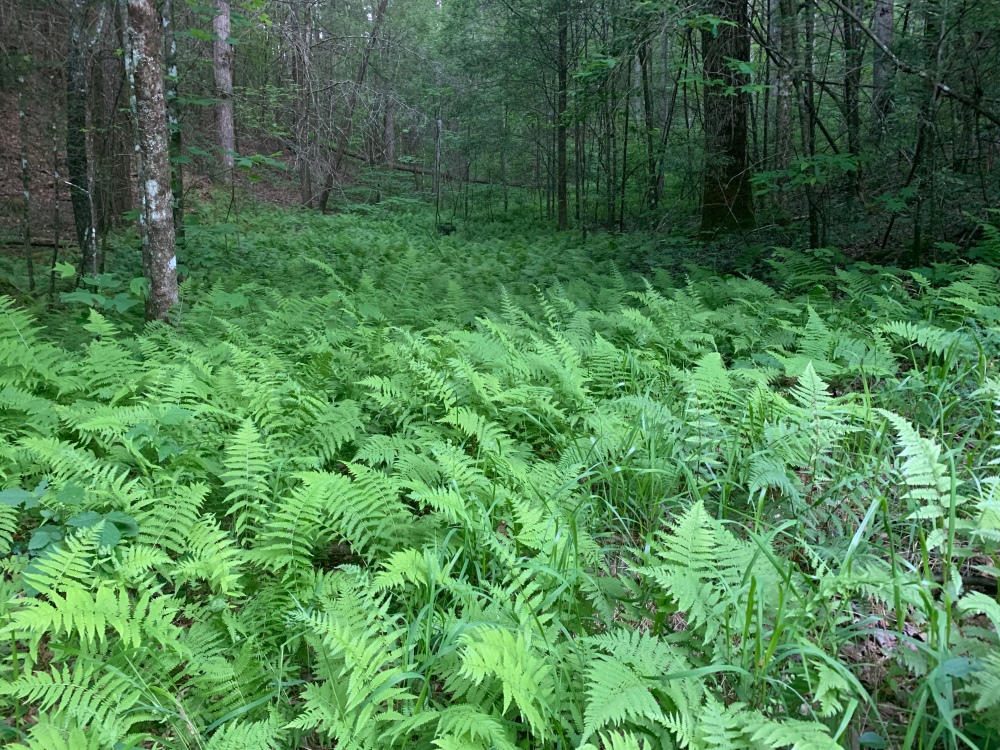 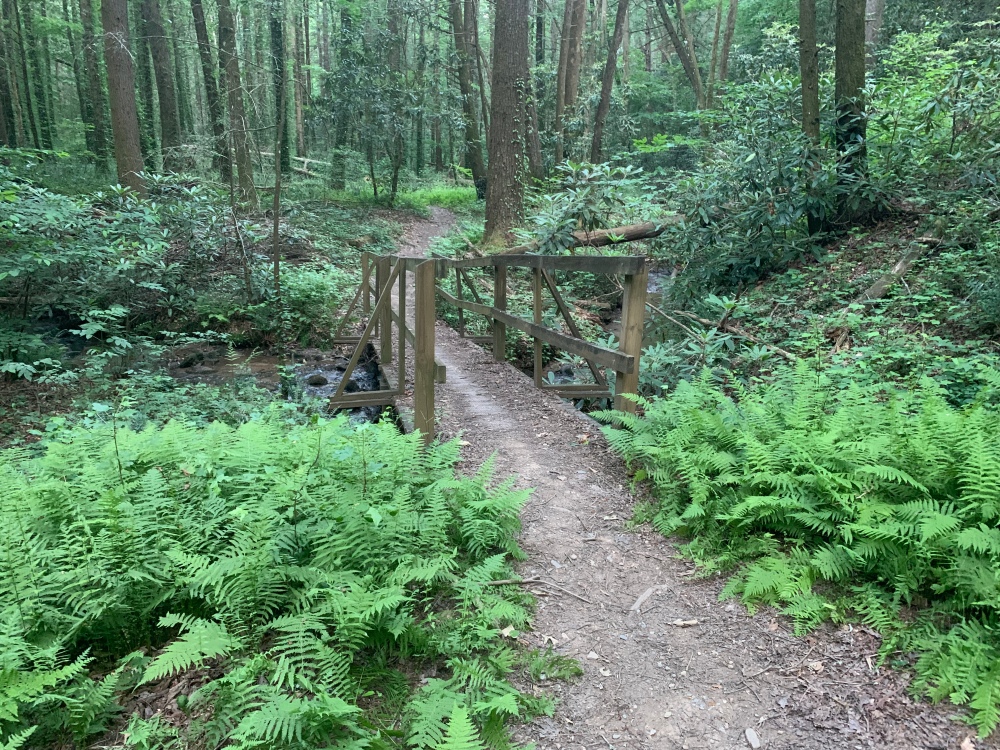 Once we got to the tenting area, which of course was not much of anything, I was just glad to be done. This trail had me so beat up and I was so tired. We decided to set our tent up right on the trail by the water source given that everywhere else was completely overgrown. We just hoped that no mountain bikers would be traveling through during the night or early next morning.

Jump Ahead to The Pinhoti Trail to the BMT

Jump Back to The Pinhoti Trail: Part 16