I did a thing today. Probably won’t do it again. But I also said I wouldn’t run 13.1 miles ever again, sooo… 🤷🏻‍♀️Thanks @trevtrevorwhatever for the support, and super rad to catch up with you @wildturkeytrotsthru Thanks for the hospitality!
9/9/21 - Mission Accomplished! 🤘
Montana! You pretty!
Yet again, Montana brought the hiker friendliness in Augusta, and a sweet sunset too! Once we were able to force ourselves to leave, we were off to “The Bob” and finally got to see the Chinese Wall. We’re officially in the heart of grizzly country, y’all! 🐻
The sweet views continued all the way to Augusta!
Had an awesome birthday which I celebrated with my stinky, freeloading #hikertrash tramily, the wonderful people of Lincoln, and Daryl the Sasquatch. The hike from Rogers Pass was just as amazing as the hike into it after we hunkered down in a yurt to avoid the rain. More climbs, but a lot of ridge walking by rock ledges and towers.
No more smoke, but the days have been windy and the nights have been cold. We visited an amazing outfitter in the middle of the trail, got to see Golden, a familiar face from the AT (2016), and lots and lots of cows! I had been in a bit of a funk lately, but the ridge walk right before reaching Rogers Pass snapped me out of it!
Got stuck in the Butte vortex. We hitched in, hitched out, hiked to the north side then hitched back in. Pizza Ranch was our second home. Eventually we made our way to Helena, our second vortex. Before our arrival, we got pounded by hail and rain. The wind was blasting through the trees so hard, they were snapping like twigs behind us. The people of Helena were beyond hiker friendly. We got stuck a second day when a girl working at the brewery let us crash at her place for free, hot tub included! Life’s good!
The road walk continues. Nevada City to Twin Bridges to Silver Star to Butte! Time for a couple zero days!
Posted on July 17, 2019July 14, 2019 by Stubbs

Frisbee’s knee was feeling better in the morning and the swelling in his foot went down. It looked like it might have been a spider bite. 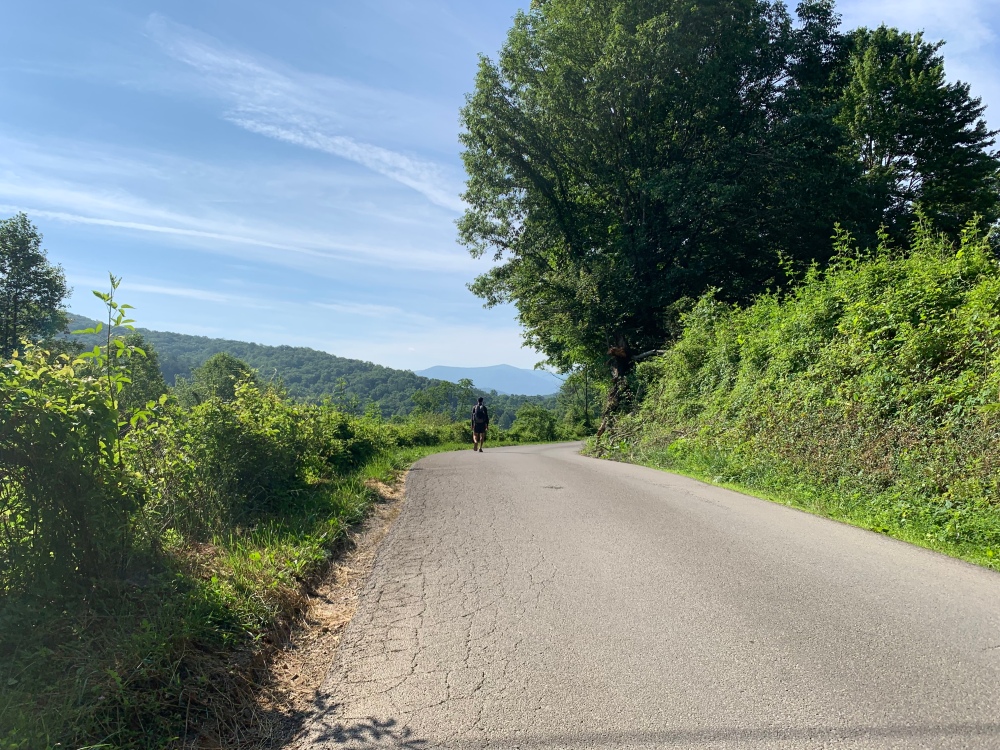 On our way out of the woods, we saw a bear running down the hill from us and passed through some mountain laurels. The residential neighborhood we passed through had some really pretty real estate! We’d cross over and along roads for a while, and pass a good looking shelter before we reached US 76. 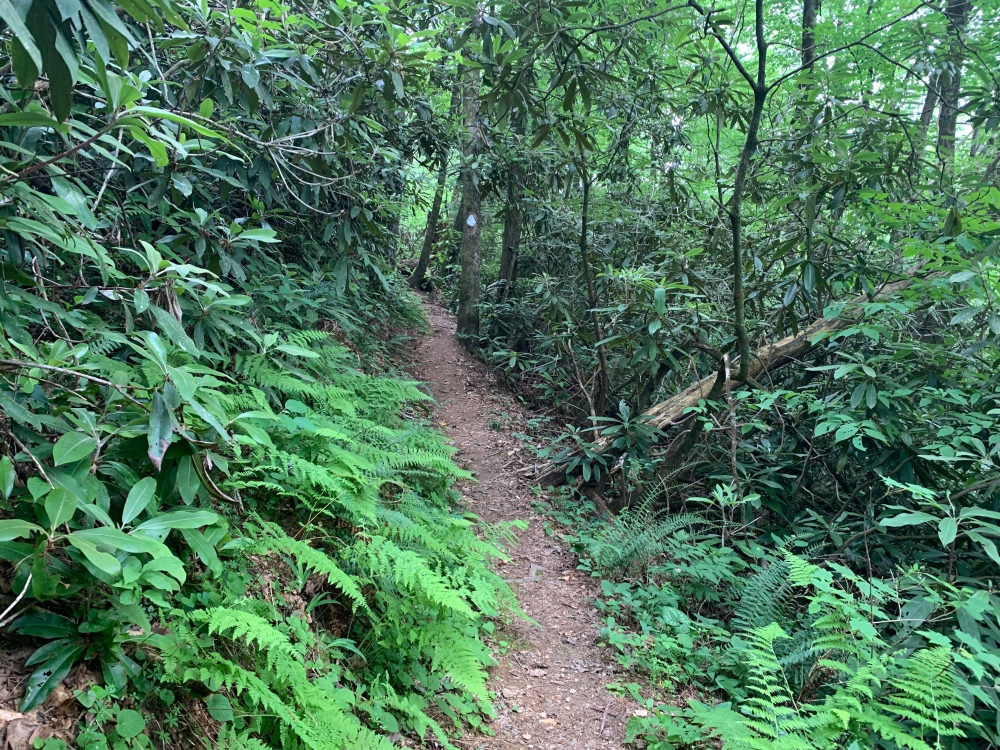 We caught a hitch to the town of Blue Ridge with a lady whose son and husband both hiked the Appalachian Trail. Her son also triple crowned and now lives in California growing pot legally. Between her and her second husband, they have a total of 7 children! Quite the big family!

She dropped us off at McDonald’s where we ate lunch and resupplied. We bought some McDoubles to pack out, then walked to Walmart to get a few extra things. We were still hungry, so we got milkshakes at Dairy Queen before returning to the road to try to hitch back.

While dancing for a hitch at an intersection, a guy in a pickup truck that drove by started hooting and hollering at us. We laughed and continued our attempt to catch a ride. The same guy ended up turning around and told us he’d take us to the trail.

“You’ll have to sit in the bed though, I got my kids in the back.”

Nothing new to us! We hopped in and thanked him and his wife for helping us out once we reached the trail crossing. We crossed the highway and took a gravel road passed a bed and breakfast, then entered private property with a sign stating, “Hikers Only”. 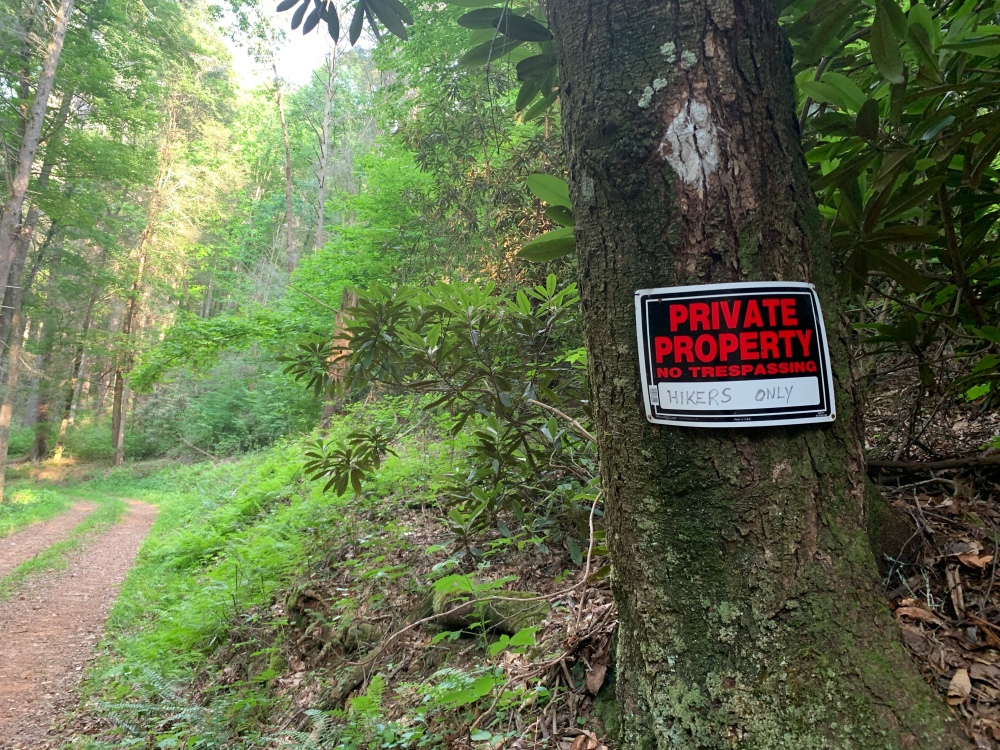 After filling up on water, we found ourselves walking through a field, parts of which looked like was in the midst of constructing houses, then we re-entered the woods.

There was a steep climb up to Scroggin Knob at mile 243. We had planned on hiking further that day, but we decided to stop there. 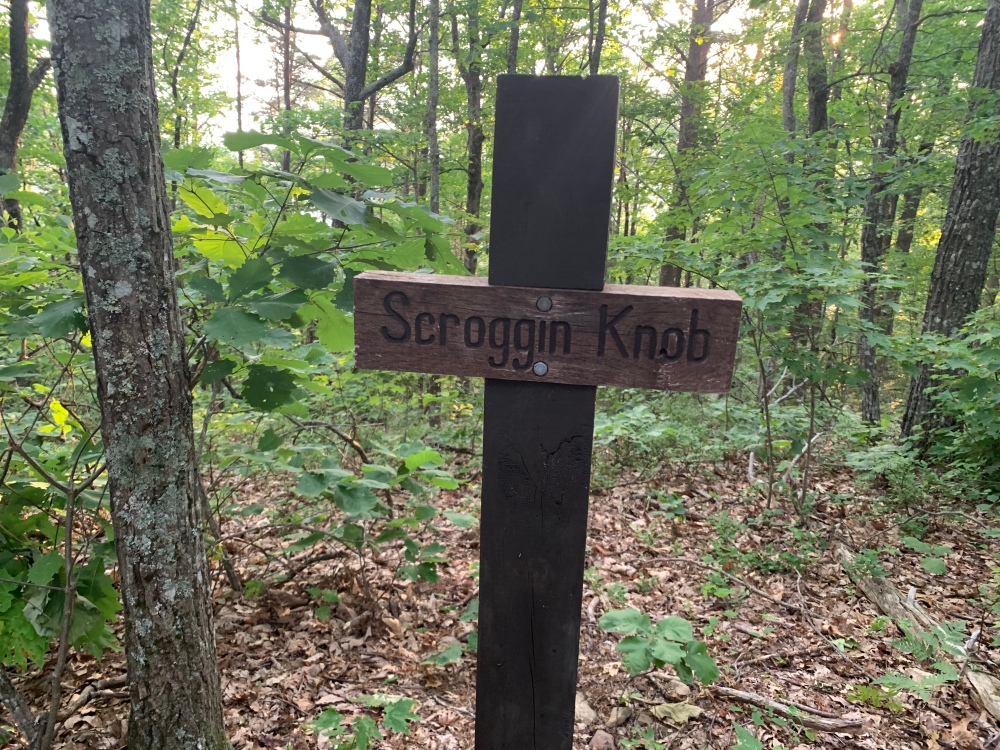 We didn’t have to be in such a rush anymore. We had plenty of food, and there was limited mileage left until the end of our journey. Given that our ride out wouldn’t be arriving for another three days, we desperately needed an excuse to slow down.

Frisbee started a fire, which we enjoyed at first. Then it started raining wood roaches! I suppose the smoke from the fire was disabling them in the trees. They began falling on our heads, and would continue falling on our tent early in the night.

The roaches weren’t the only gross thing attracted to us that evening. We had a mouse scurrying along the perimeter of our tent. At first we thought he smelled our McDoubles. Frisbee threatened death upon the little vermin. You don’t get between a hiker and their food! You…will…lose! Then we realized we must have been blocking his usual route. After a few warning blows to the base of the tent, he started leaving us alone.