The Benton MacKaye Trail (BMT) would intersect the Appalachian Trail (AT) a few times throughout the day. We ran into a trail maintainer who was weed whacking. They have to carry out all their materials, including gas, so we quickly said, “Hi,” and “Thank you,” before letting him get back to business. We shortly ran into another trail maintainer named Gilbert Treadwell, a good surname for a trail maintainer and hiker, if you ask me! We talked about the trash we saw left on the trail from the trail runner event yesterday, and vented our frustrations. We told him about the trail conditions of the Pinhoti Trail vs. what we’ve experienced so far on the BMT. He told us about his upcoming trip to Alaska, which he’s, “jotting off his bucket list,” and we also talked about John Krakauer books and the movies based off of them. 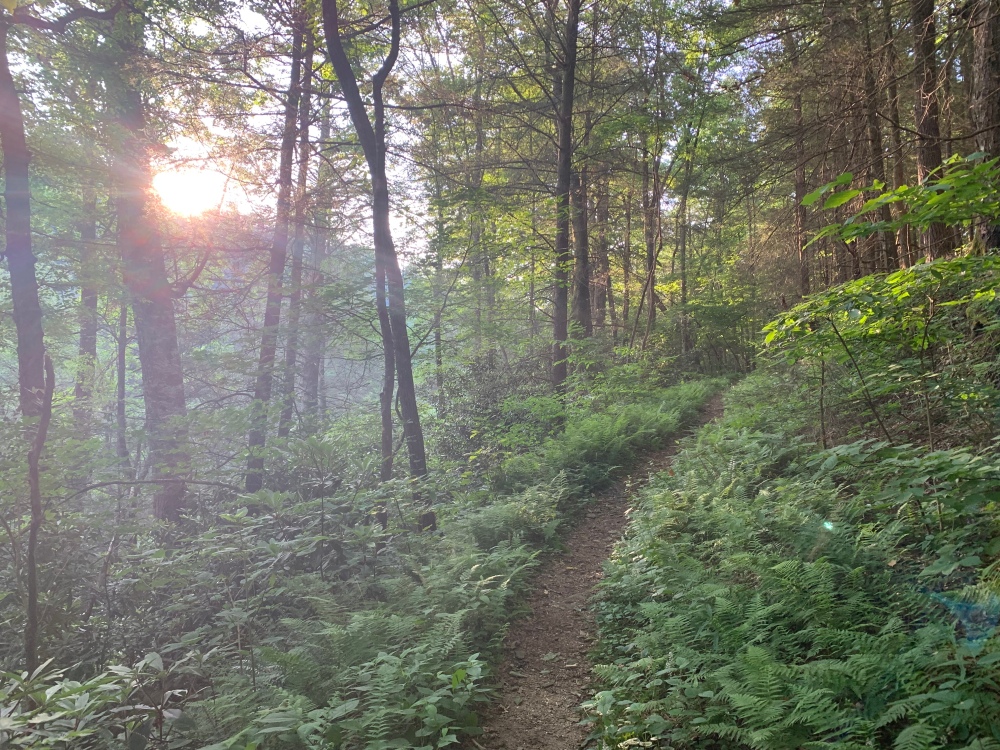 We carried on our hike and drank some water from a stream before we made it to Owen’s Overlook. 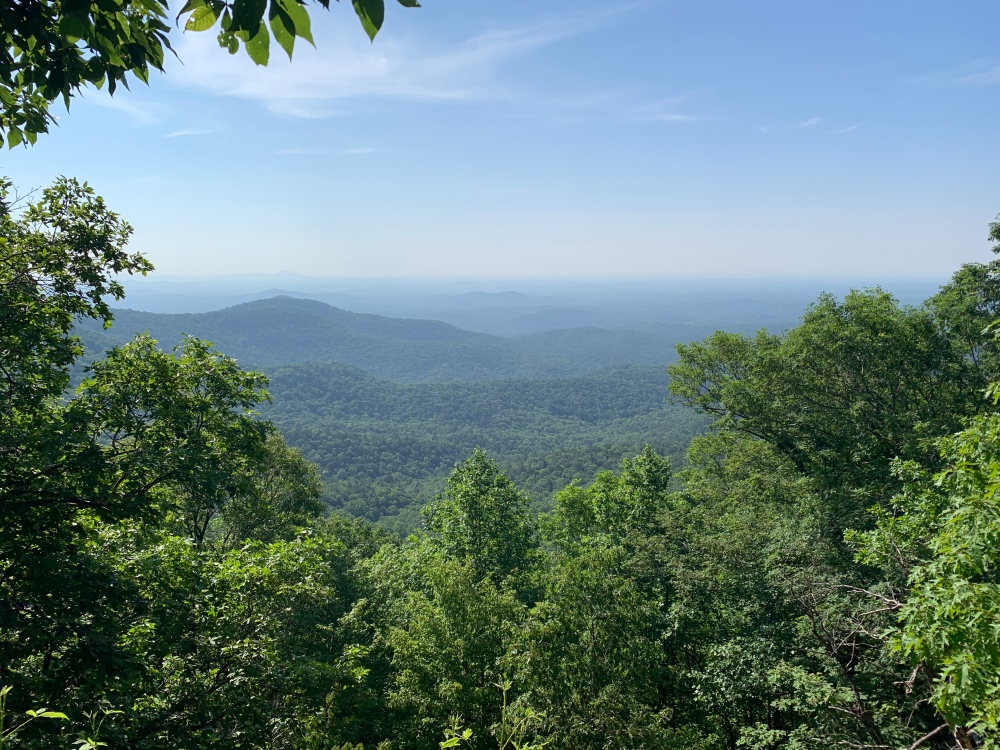 We saw some wildlife as we climbed up the trail to make it to Springer Mountain. We startled a baby, black bear which started to climb a tree when it saw us before hopping down and running off. Then we passed a cluster of baby turkey chicks hiding in the grass. We saw some people too. There were several section and day hikers out and about. 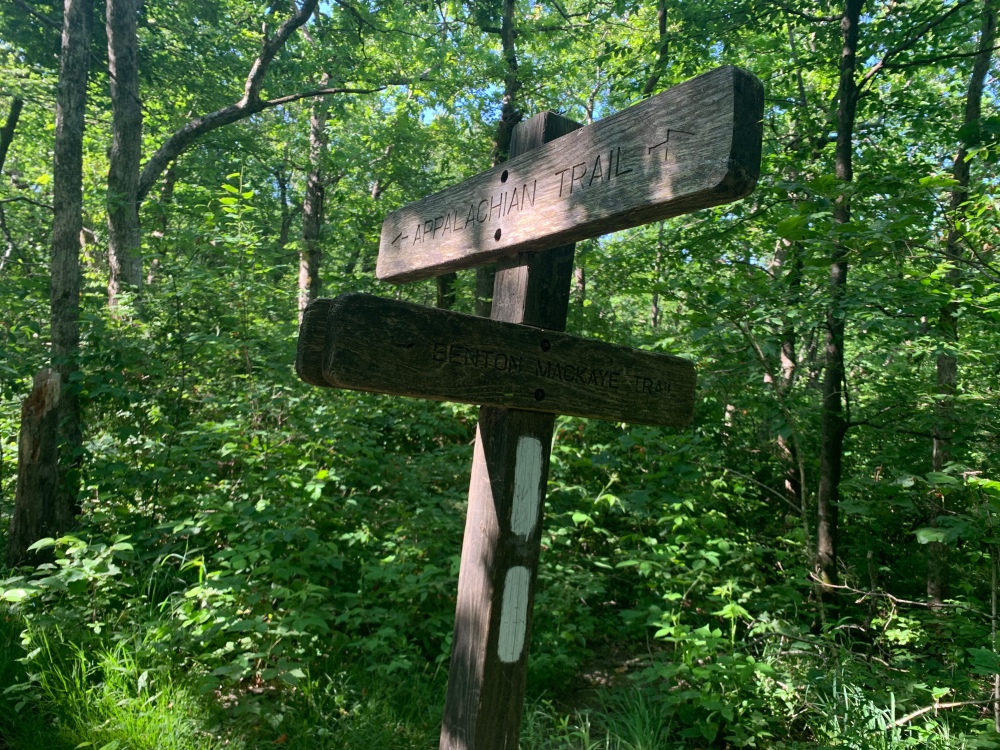 Then we finally made it! Our hike was still not complete, but we arrived at the Benton MacKaye monument, marking the beginning of the BMT for many, but the end for us. 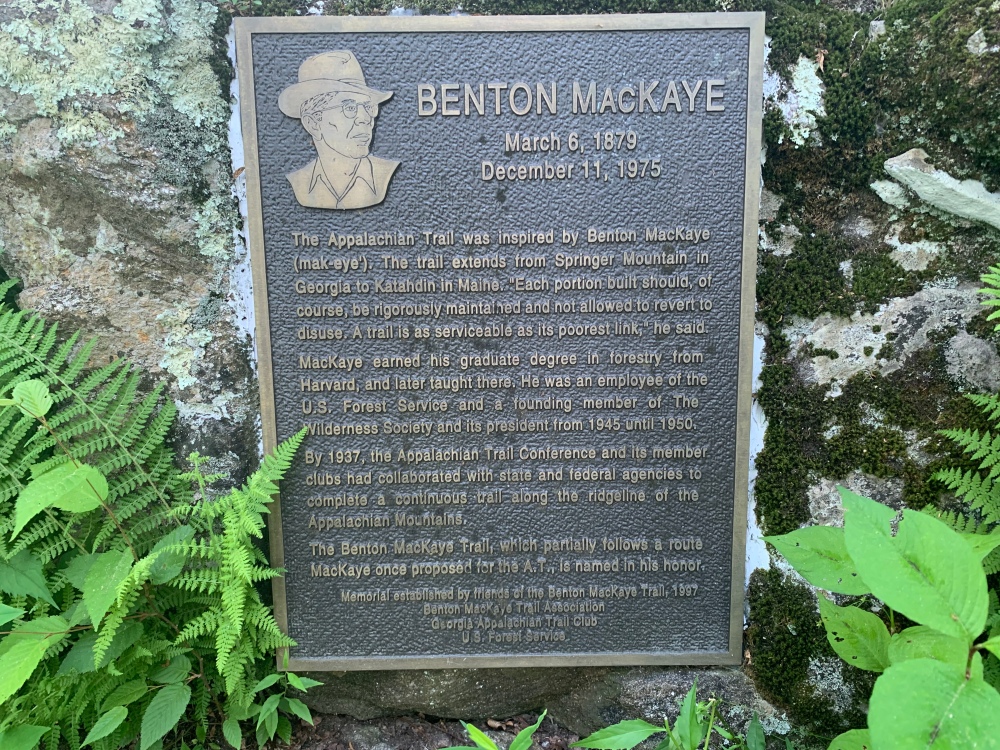 It was just a short walk from there to get to our next destination, the top of Springer Mountain. This was where it all started three years ago. The beginning of my AT journey and my metamorphosis from Lynsey, a generic, societal game piece, to Stubbs, a trail junkie and self proclaimed “hiker trash” (a term of endearment in the hiking community). 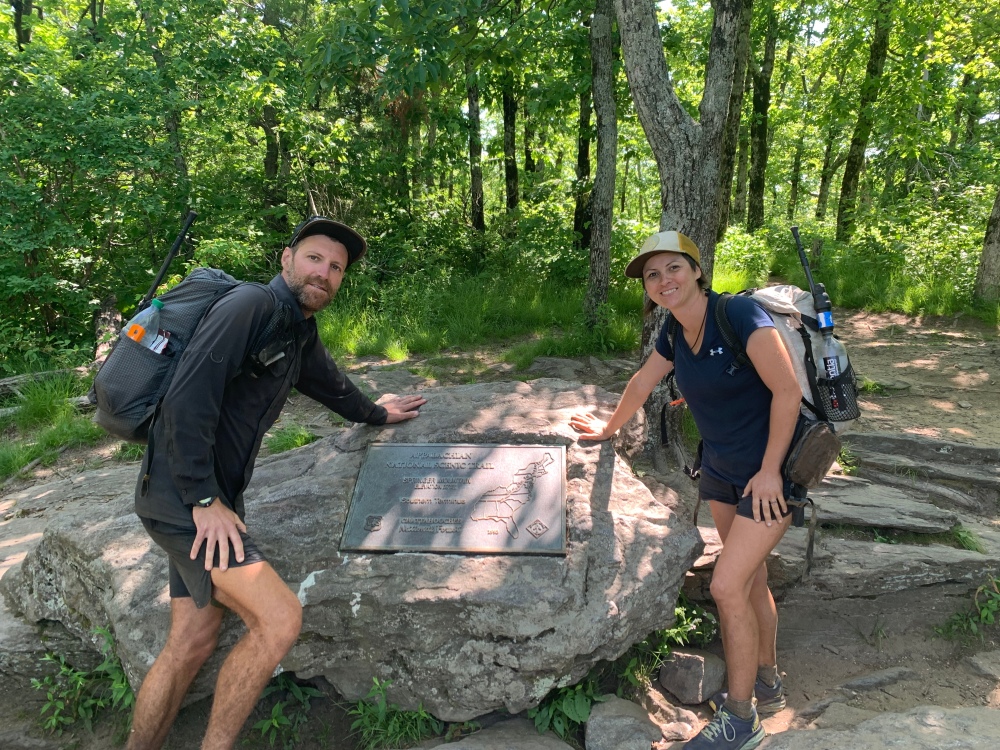 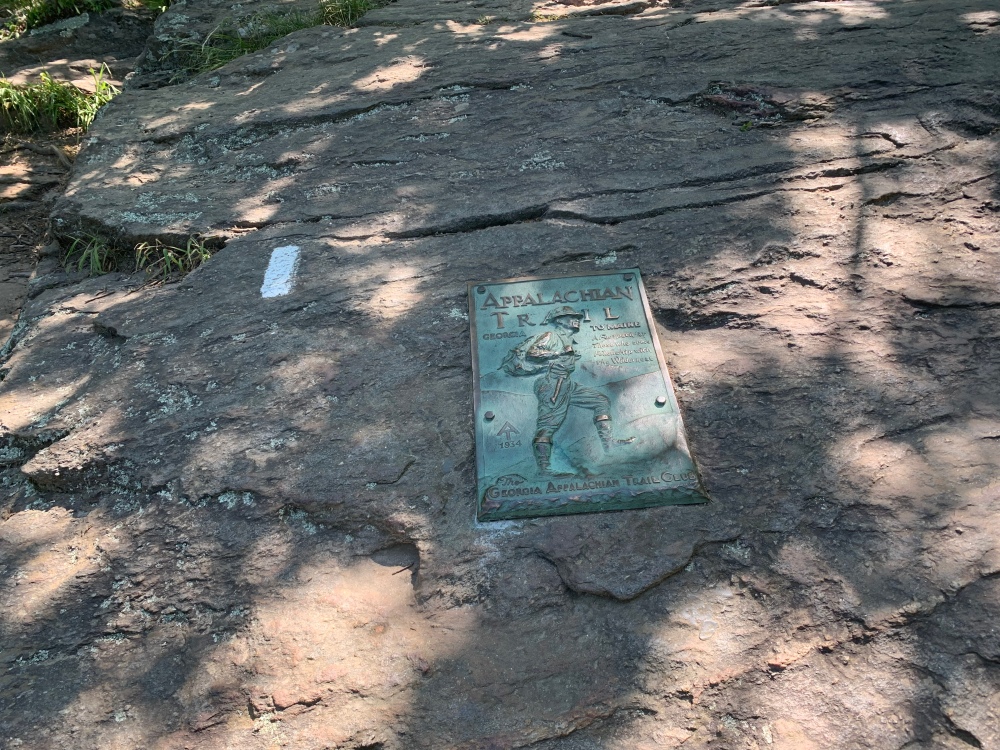 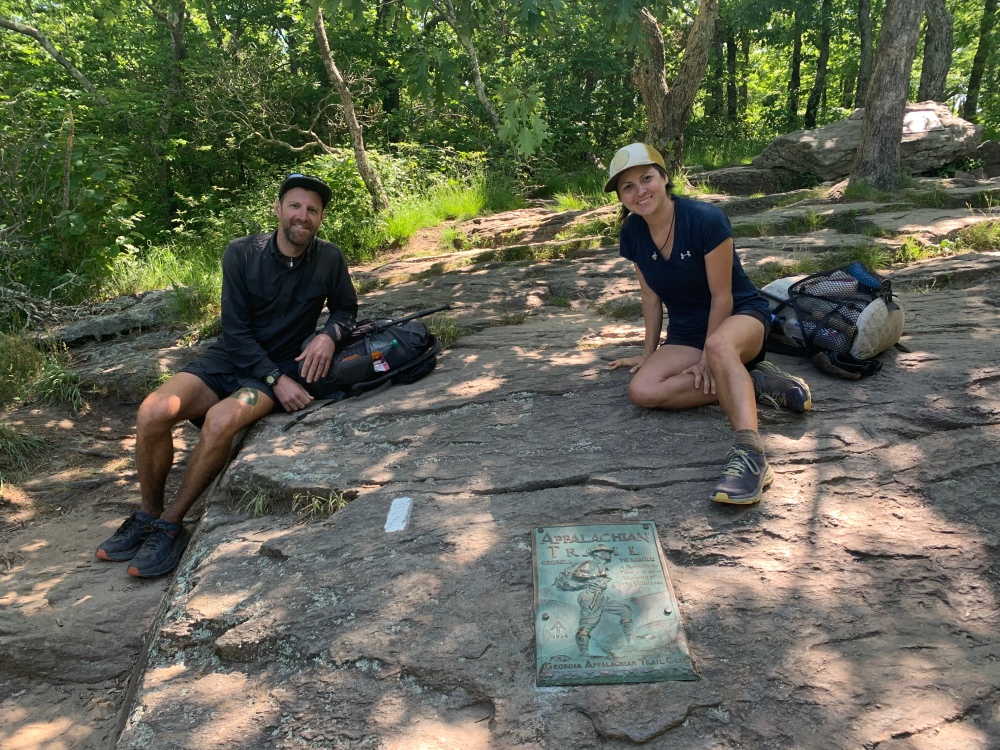 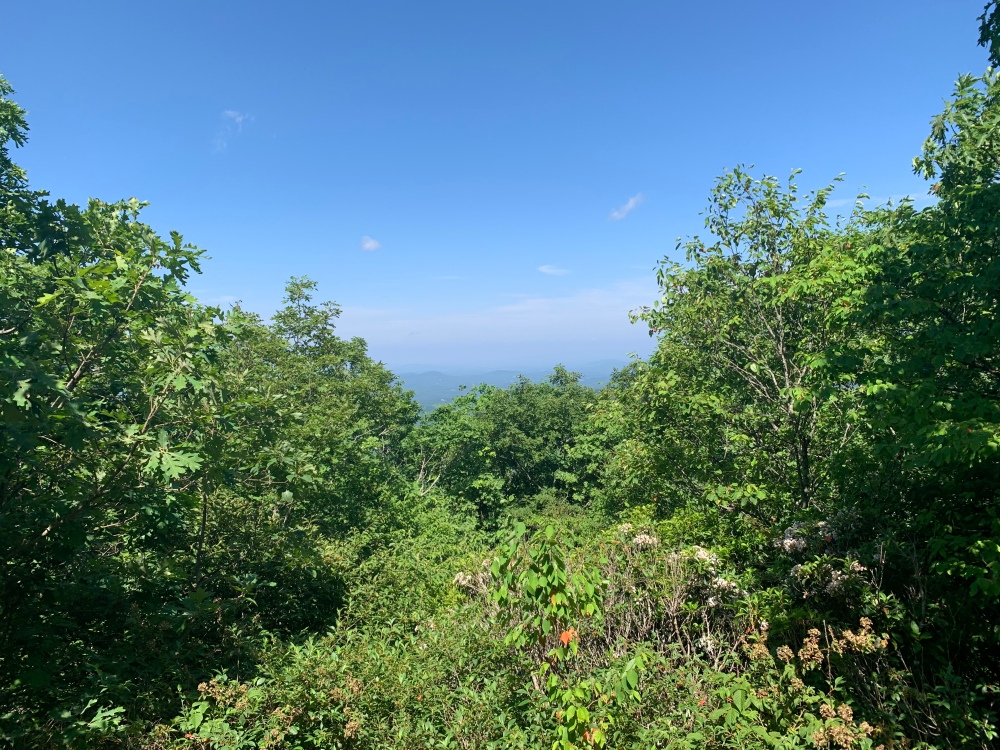 From there, we began our hike down to Amicalola State Park via the AT Approach Trail, a feat far less challenging than when traveled in the opposite direction as I’ve done twice before. 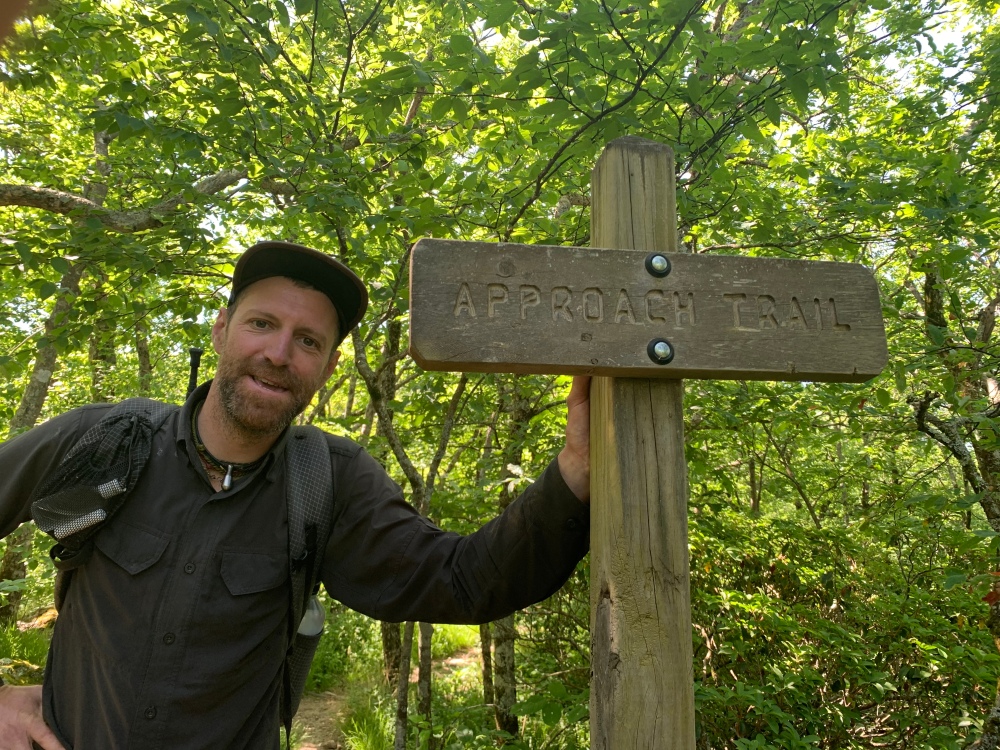 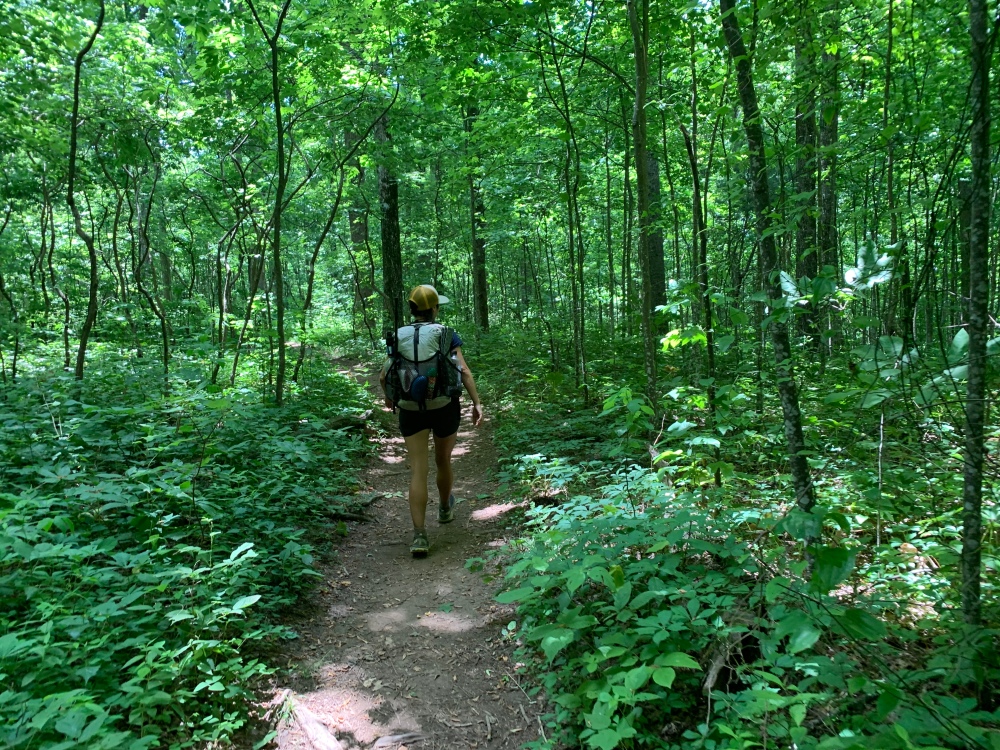 Mentally exhausted, I was overjoyed to finish bumping along the groomed trail and start the hike down to the parking lot at the top of the falls. 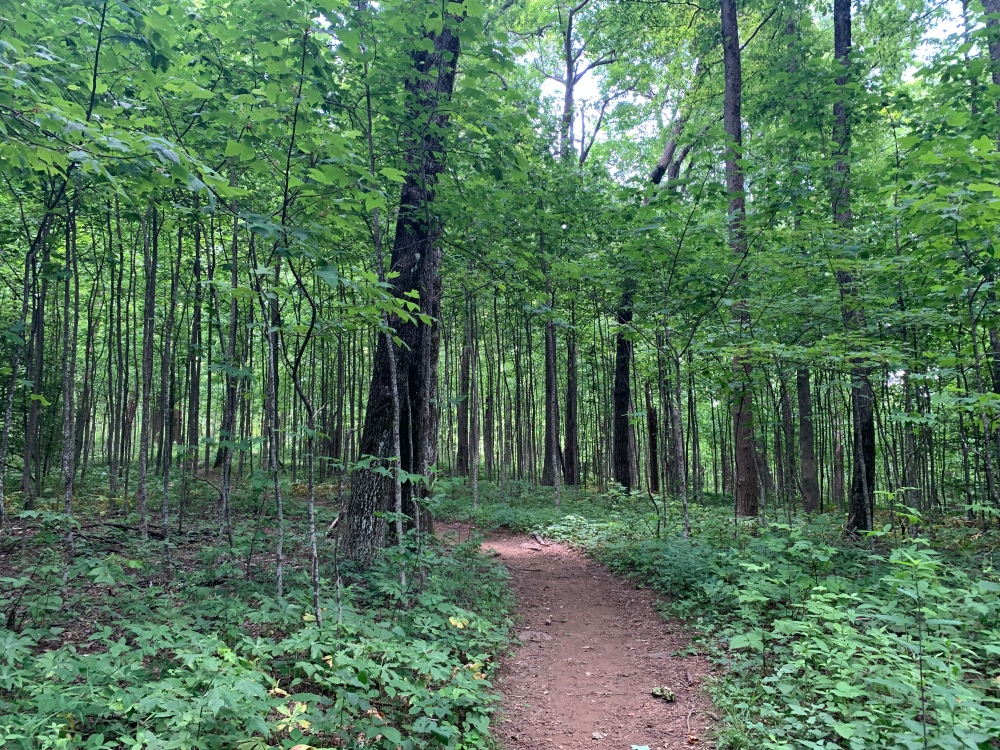 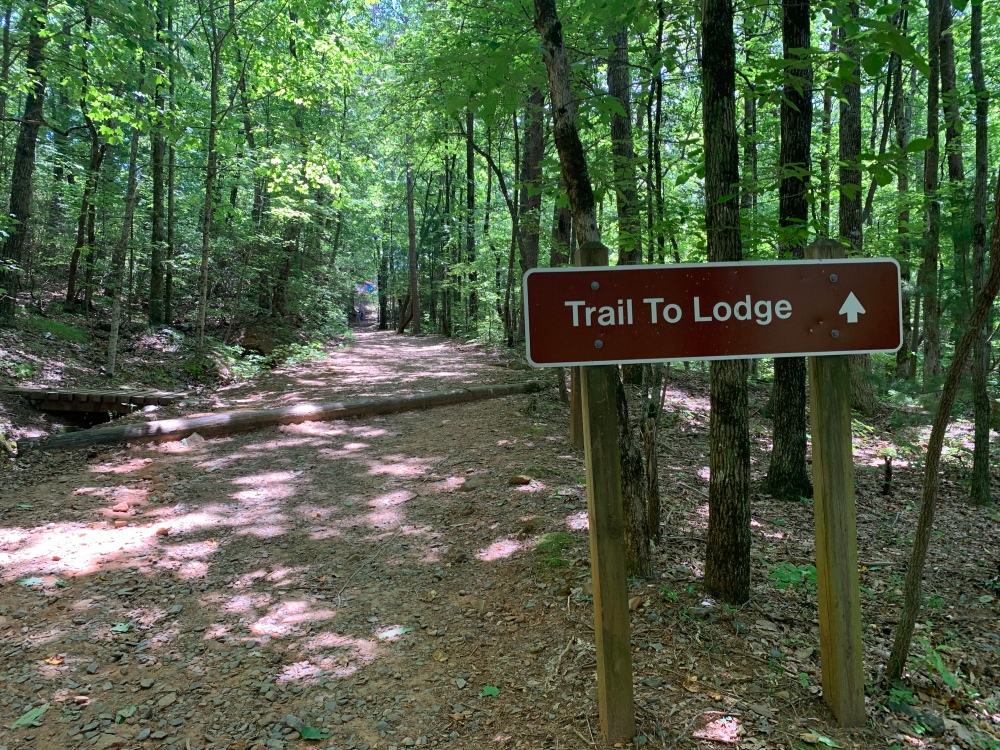 Then we took the side trail to the lodge where we found coffee and soda available for the taking, for a fee of course. We roasted on the deck where our odor would be less offensive and enjoyed the view. 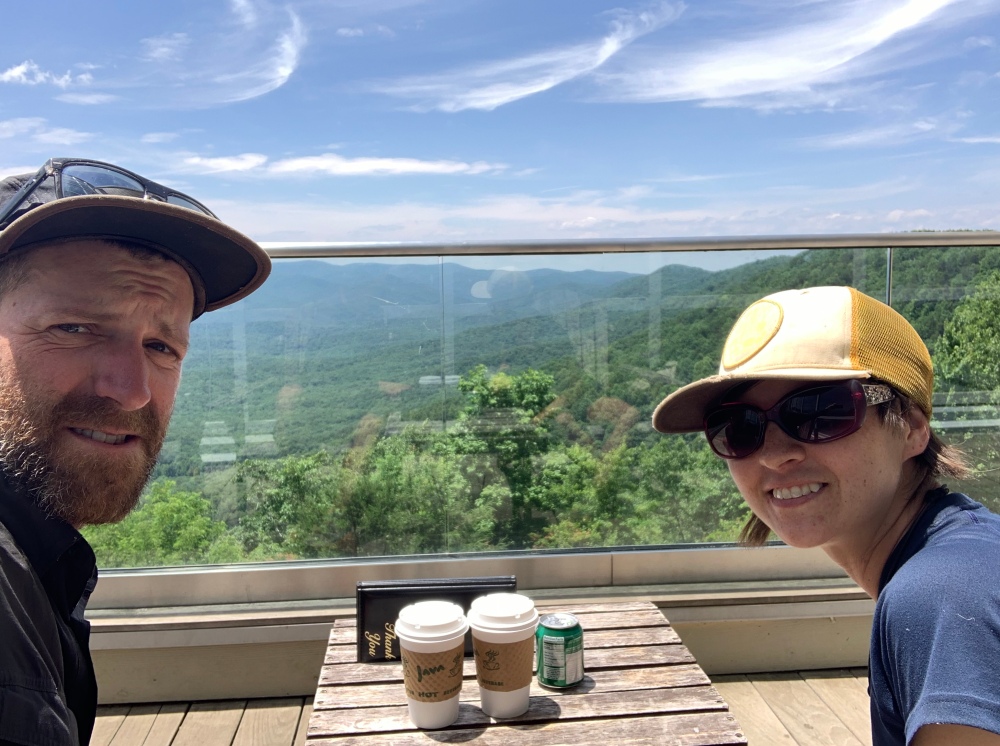 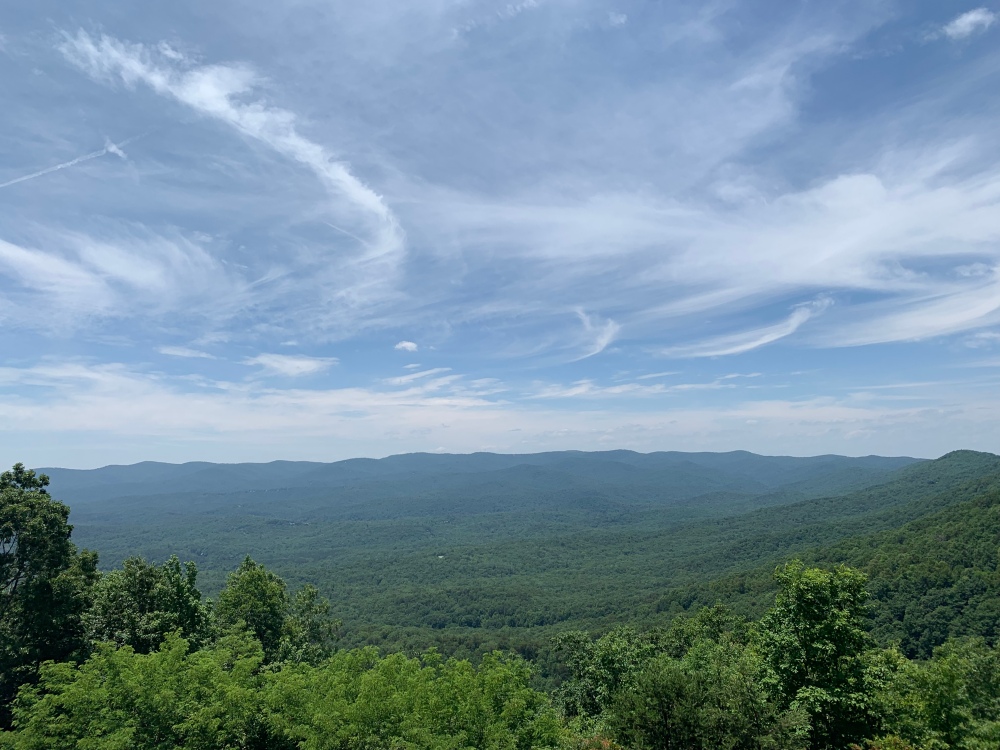 Occasionally people would approach us to ask us questions about our journey, about the Approach Trail and the Appalachian Trail, and for general small talk. In particular, we met a couple, Craig and Patty who were visiting from St. Augustine, FL. Craig was a trail maintainer for the Florida Trail, which we haven’t completed… yet! However we plan on returning to it in the not so distant future to wrap it up. We talked a lot about hiking and traveling.

I also came into contact with three men on the deck as I was enjoying my ice cold soda. They asked me where the AT started. They were under the impression it started with the Approach Trail out of Amicalola Falls. I informed them that that’s just the unofficial starting point. In my opinion, it beats the hell out of getting dropped off at the top and having to backtrack. It also beats the hell out of you while you’re hiking it, something I think all potential AT thru hikers should experience before hand so they know what they’re getting themselves into. After educating them about the trail, they walked away. One of them was so kind to crop dust me before heading back inside. When you’re out in the woods for so long, you senses are heightened, including your sense of smell, so I was not too pleased.

We ate dinner next to some poor couple who had to smell us as they ate. I figured the staff here would know better, especially in a large, empty dining hall. After requesting the menu a couple more times for more food, we returned to the Approach Trail and worked our way down the infamous stairs along the falls. They were so much more enjoyable going down than up! 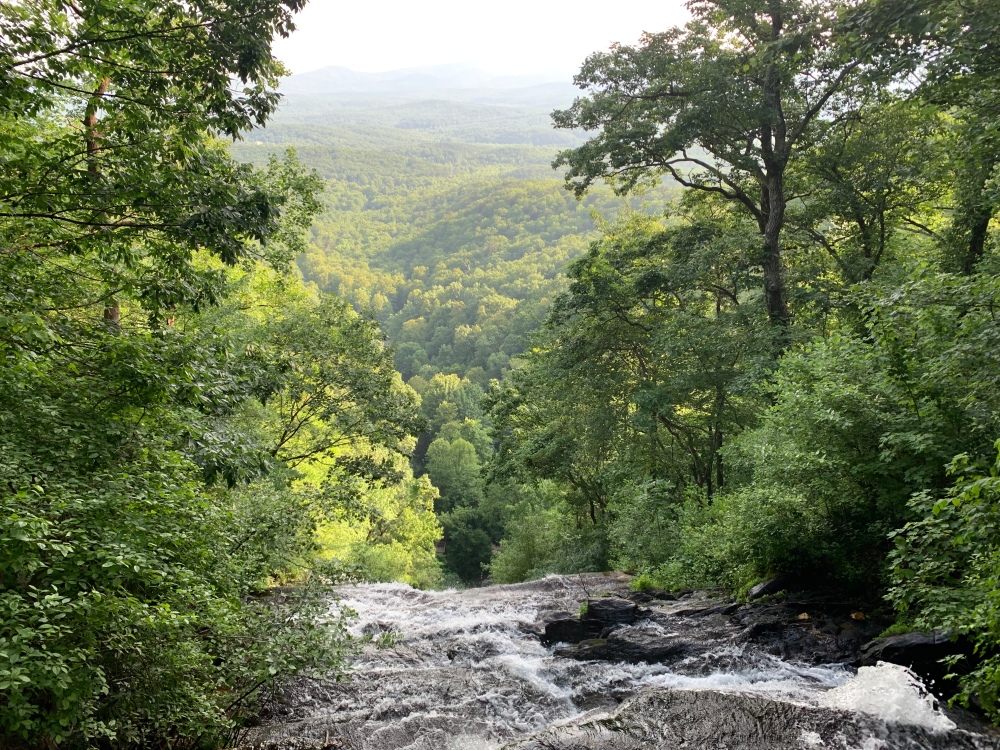 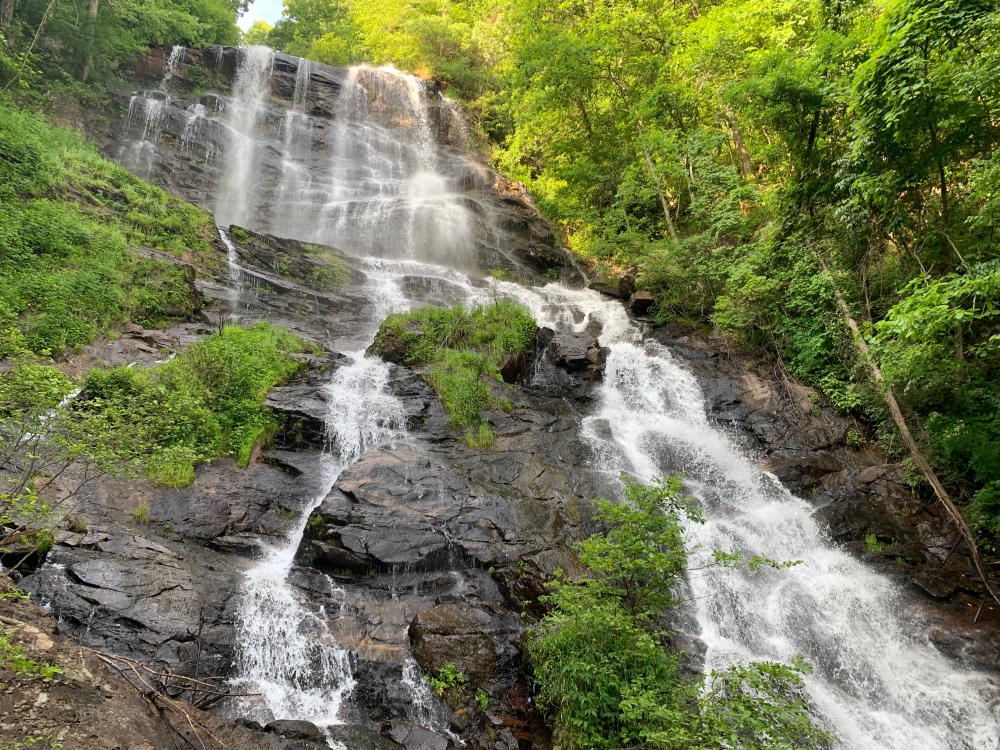 After reading a billboard, I found a place to score a free shower. There was even body wash waiting inside! Peppa Pig Bubble Gum body wash to be more specific. We were getting eaten alive by the mosquitoes, so we pitched the tent and hopped inside. 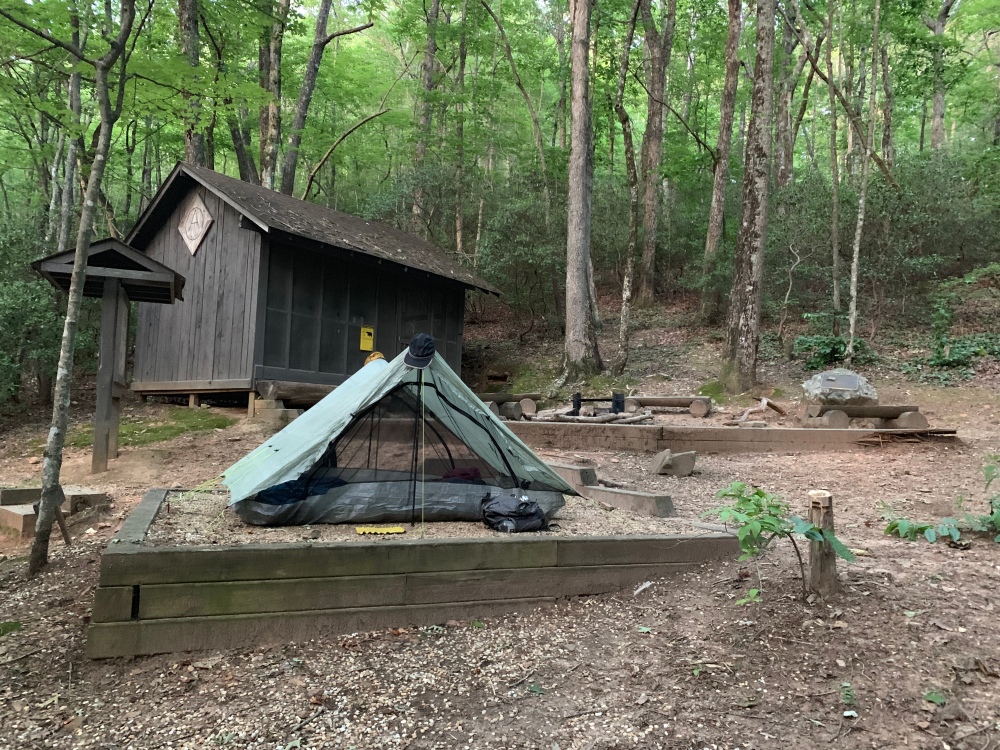 Tomorrow, we were going to see an old friend and trail family member, Wokman, who would be picking us up. Our hike was over, but we were still thrilled to catch up with him and his family.

Jump Back to The BMT to Springer Mountain: Part 3

3 thoughts on “The BMT to Springer Mountain: Part 4”