The Cirque of the Towers Route left me speechless. 😶 All the views. ⛰ All the #rainbows . 🌈 All the #lakes . 🏊🏼 The Winds have stolen my heart. 😍
Had a good time in #lander then a horrible time back on trail climbing over the worst blowdown section I’ve ever crossed through. 😖 Our group got separated in the mix. The days that followed would make up for the headache. The Cirque of the Towers Route was amaze balls! 😍
The Basin. Pretty much just vast nothingness, a few pronghorn, and lots of cows. It was mostly dry and hot, although we did experience some thunderstorms. Also, my oxen broke a leg 🐂 and I have died of dysentery on the Oregon Trail.🤠 These things happen. 🤷🏻‍♀️
We hitched back from Encampment and accidentally camped on private property. 😬 Fortunately, the guy wasn’t mad when he found out we were CDT hikers and let us stay. Our views were hazy due to the wildfire smoke. 🔥 We passed through the affected area two days prior! A road walk to Rawlins followed, and we found ourselves herding cattle and dodging cow diarrhea. 🐂 💩 I was relieved to lay in a bed after inhaling some town food. I’ve been battling some nasty sciatic pain and blisters. Hiking through the basin wasn’t going to be too helpful.
One more state complete! Colorado was a blast and it was great to spend the last few days there with fellow AT hikers. Thanks again for the trail magic and the hospitality, @robinurthoughts and @urmygirl_blue You guys rock! Our #tramily has grown from 4 to 8 and we’re ready to take over Wyoming! Hammer down! 🤘
We destroyed some food when we reached Grand Lake. The damage from last year’s wildfires caused us to miss out on the bulk of the Rocky Mountain National Park section, which sucked. We also had to maneuver through many blowdowns, but the views during the climb up and down Parkview Lookout were amazing! The next day, we tackled a 37.4 mile day and made it to Steamboat Springs for the holiday weekend! 💥🇺🇸 🍔 Next stop, the Colorado-Wyoming border! 🤘
Sooo… we had to hike out of Winter Park otherwise we were gonna have to apply for employment. It was time! We weren’t too keen on hiking on top of mountains during a lightning storm, nor were we thrilled about the “impassible” blowdown section ahead. So instead, we connected the road from Berthoud Pass to the Fraser River Trail to the Fraser-Granby Trail. There was a lot of cool art, signage and wildlife along the way.
The climb to #grayspeak #summit was brutal, especially while having some of the worst altitude sickness in my life. 😵‍💫 But I fought off the nausea, gave my legs a pep talk and conquered my second 14er. The views were motivating, and the knifes edge before the final climb was awesome aside from the wind blowing me around like a plastic bag. The icing on the cake was seeing mountain goats during the hike down! ❤️
I was stoked to finally leave the very groomed Colorado Trail section so I could experience some new terrain. We had some big climbs, but we were rewarded with great views!
Posted on August 26, 2019December 29, 2019 by Stubbs

We passed through the archway of the Approach Trail at Amicalola Falls State Park, and slept at the Max B. Epperson Shelter the day prior. Our trail brother Wokman, who we hiked the Appalachian Trail (AT) with in 2016 was going to pick us up at the lodge. We were going to hang out with him and his family in Marietta until Frisbee’s cousin, Nina from Birmingham was able to pick us up and take us back to Maryland. While hiking the Pinhoti Trail, we had harassed Middle Brother, our friend from the AT the second time around in 2017, and tried to persuade him to meet up with us. We never heard back from him. So we were stoked to see both Wokman and Middle Brother walk through the doors of the lodge! It was great reuniting with our trail brothers. They brought us chicken biscuits from Chick-Fil-A, and we chatted on the deck of the lodge before driving back down to the visitor center. 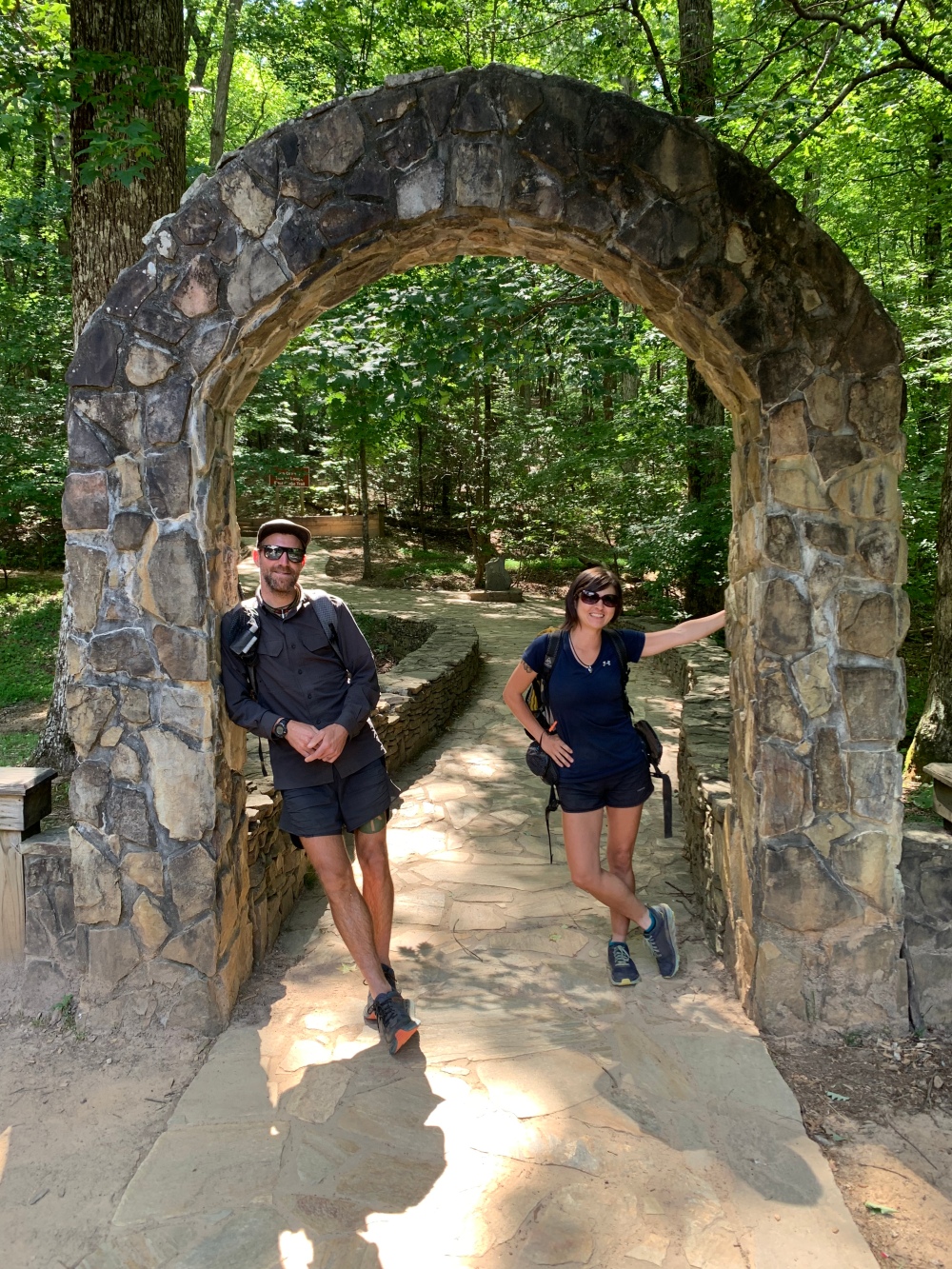 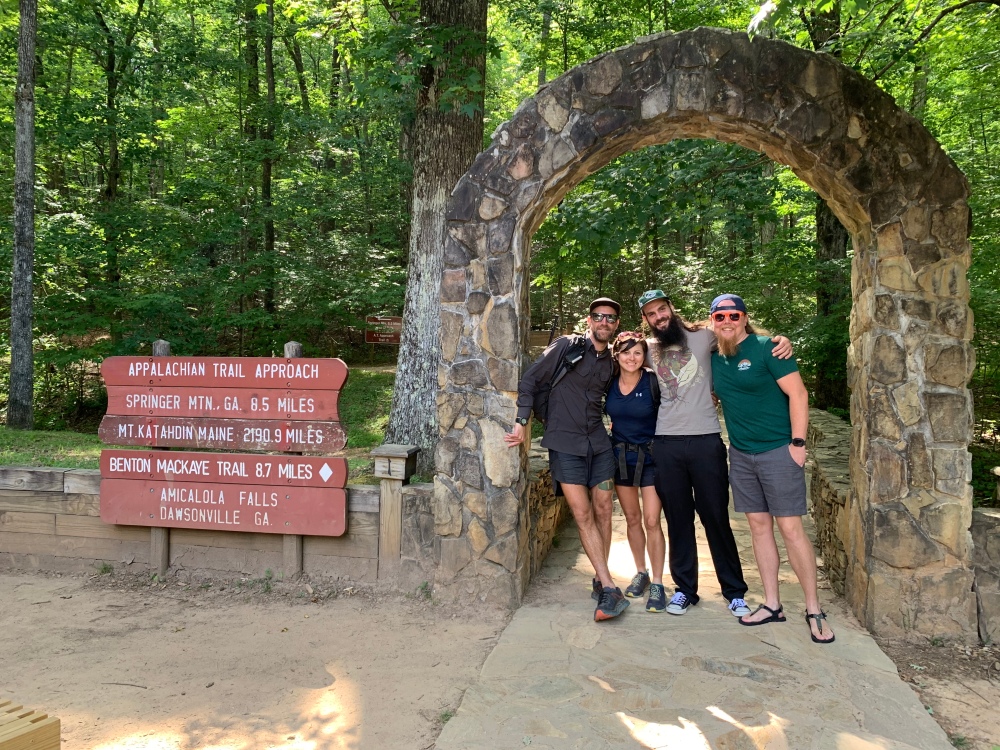 After taking a few sentimental pictures at the archway, we started heading towards Marietta. I don’t know if it was Wok’s deranged driving maneuvers or the fact that we hadn’t ridden in a car in ages (aside from short hitches to town), but I was feeling a little car sick. Fortunately we were traveling in fragments as Wok gave us a short tour of the area.

We visited beautiful Helton Creek Falls, passed through Booger Hollow, then he took us to bag a peak, Georgia’s high point, Brasstown Bald. 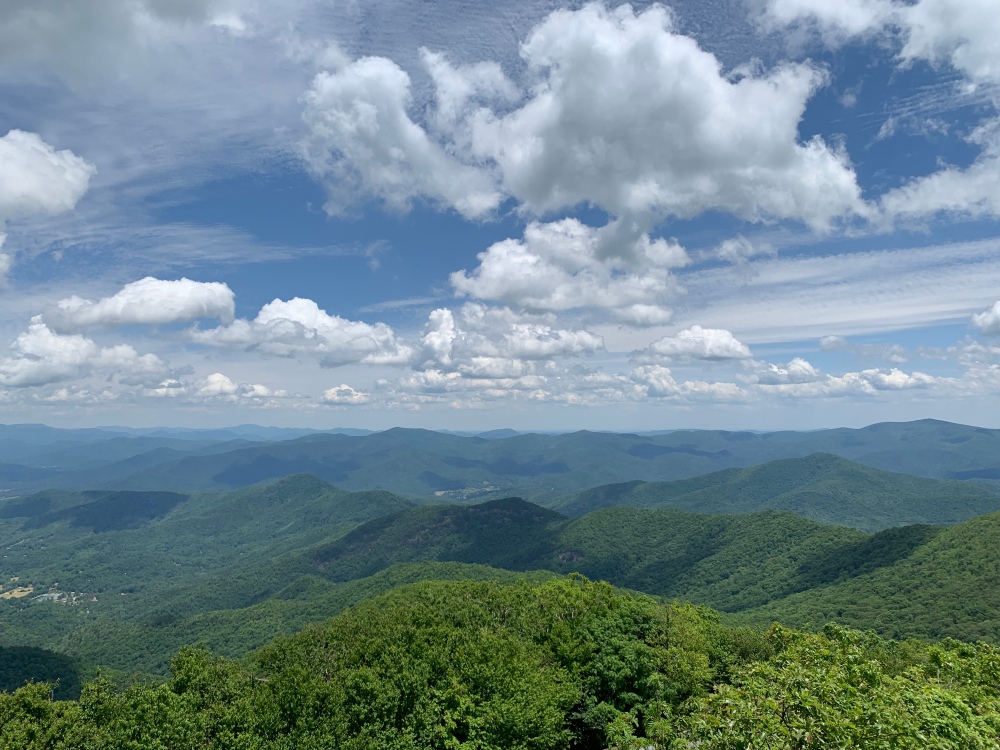 There was a fee to get in, so I was grateful that the guys humored me and followed through without complaints. Thanks again, guys! I love you! 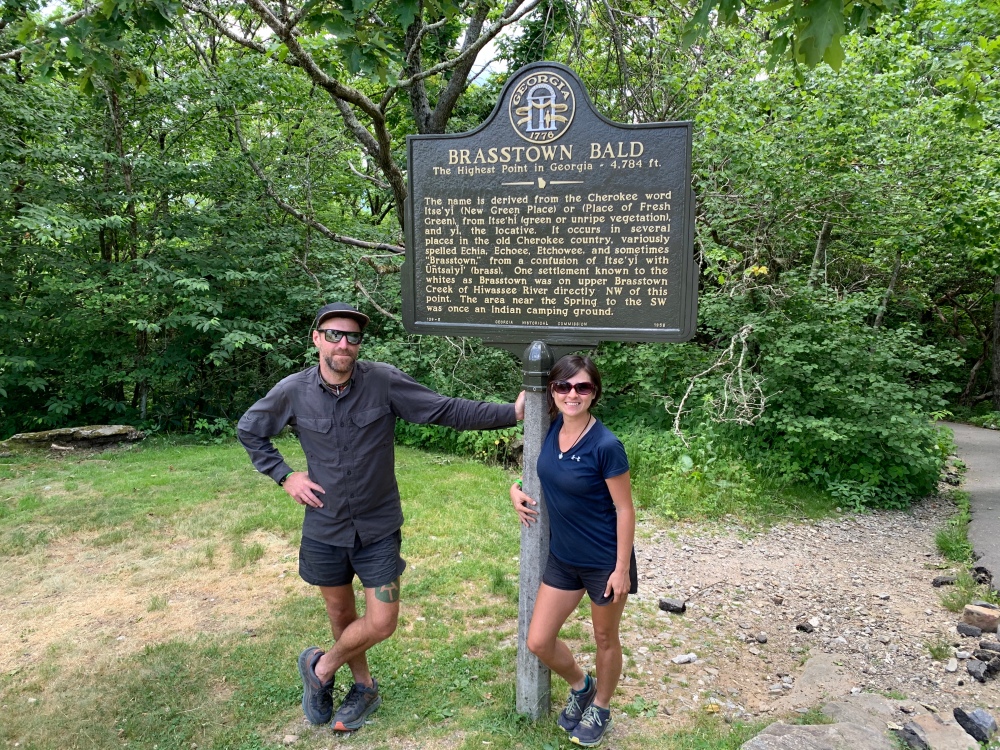 Before arriving in Marietta, we drove thru McDonald’s and stopped to get a group picture at the Season Inn at Blairsville to send to Panda. He was the only hiker missing since the last time we were all there together in 2017.

It was nice to arrive in Marietta and see Wok’s wife Honey and the kids. When we weren’t kicking back in the comfort of the AC eating an unhealthy amount of ice cream, we were touring around town.

Although driving through Atlanta is the bane of Wok’s existence, he humored us again by taking us to the ATL, a city I have never been to. Thanks again, Wok! We walked around Centennial Olympic Park before eating at the Braves All Star Grill which served up some bangin’ burgers! 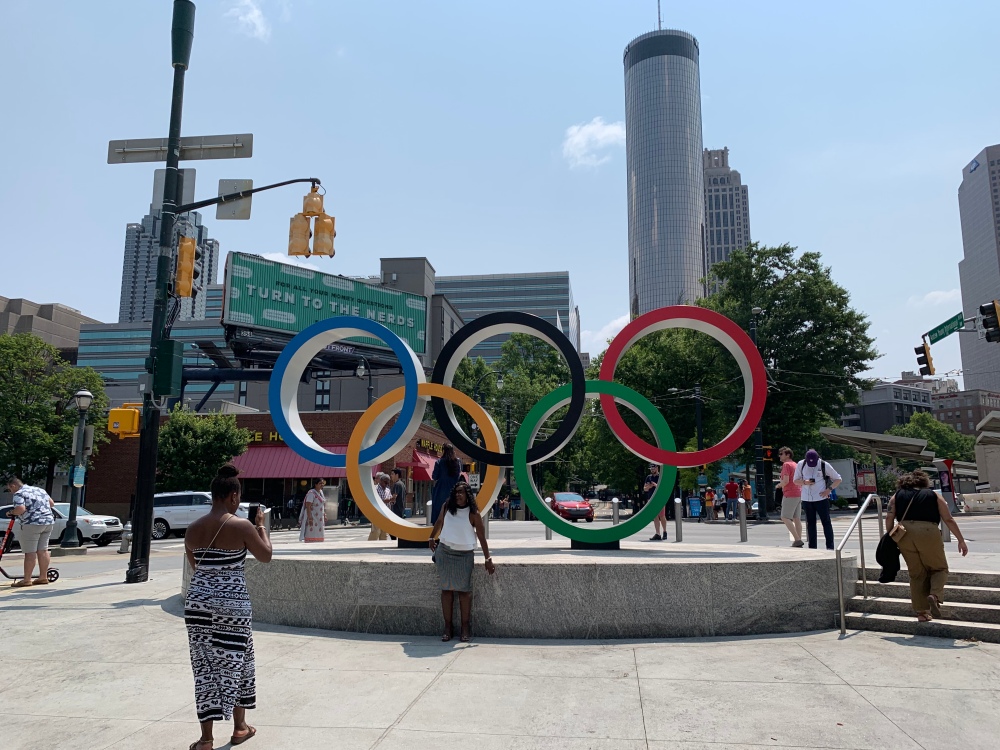 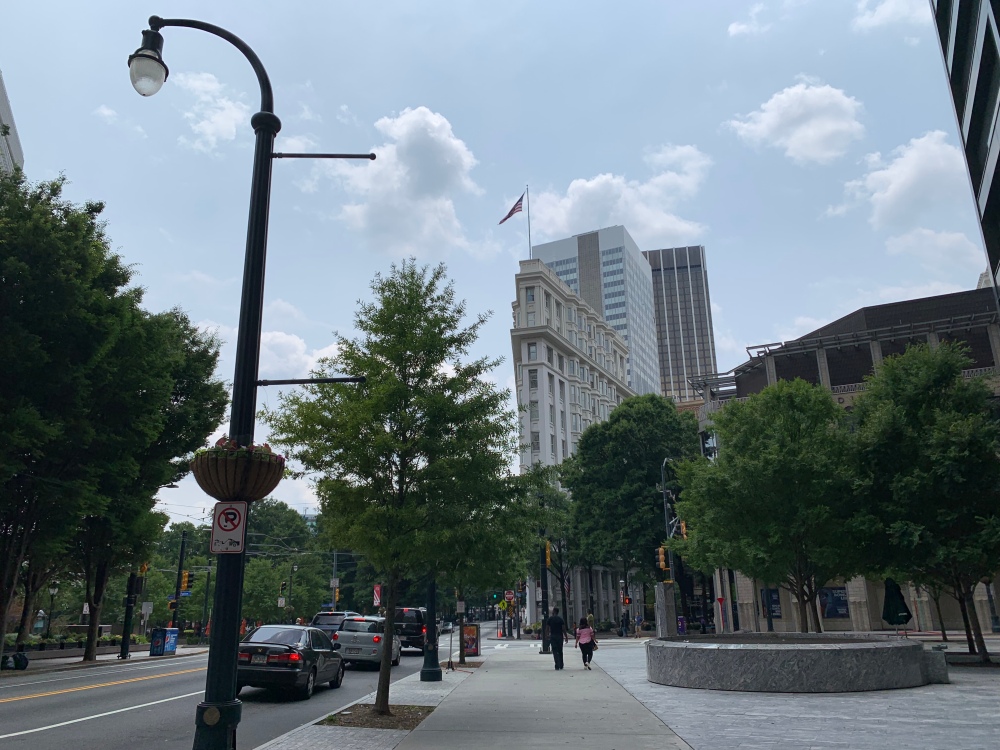 We wandered around town and made it to the Martin Luther King Jr. National Historic Park before calling it a day, and returning to Marietta.

It had been a great time catching up with the fam. Sadly, it was time to return to “the real world.”

Jump Ahead to Tales Between Trails: Georgia to Vermont Part 2