My knees were really hurting today. We all took a break at a water source, then another at the top of the spur trail to David Logan Shelter. We crossed over snowmobile trails and there were some overgrown sections that made me wonder if we were still on the trail or not.

We had a steep ridge walk and I ran into some NOBOs along the way. We had to squeeze passed one another with caution since the trail was so narrow, and there was a long way down if either of us took a tumble. As I walked by the Chittenden Reservoir, which I could barely see through the trees, I got excited when I heard the loons cooing below. I love that sound! 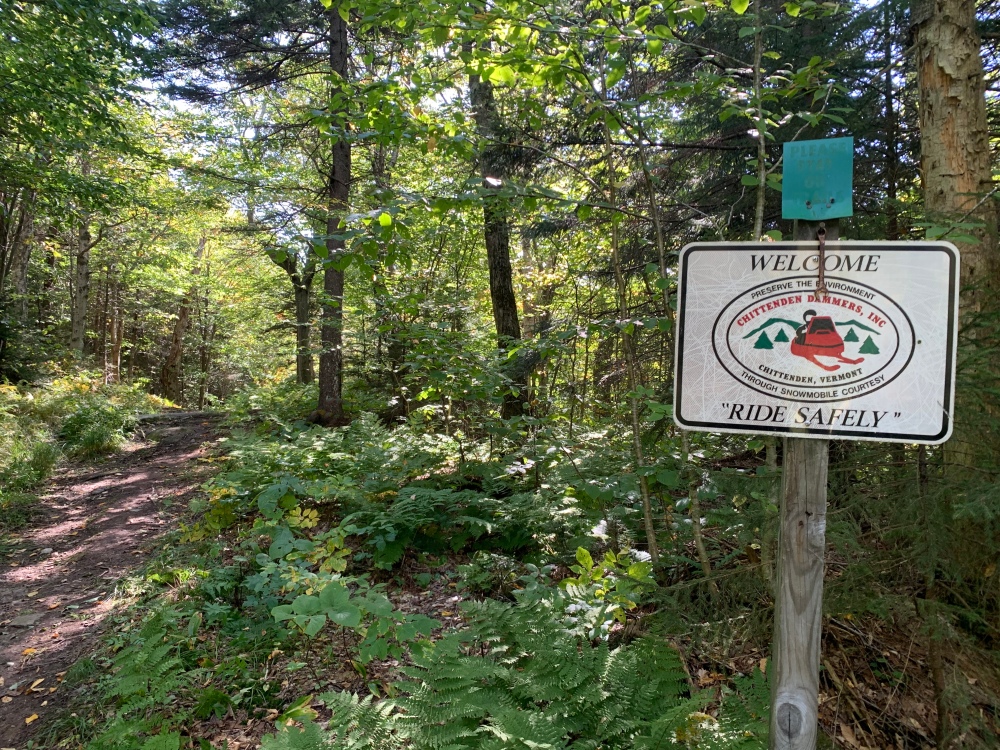 We walked along a dirt road through colorful trees showing evidence of autumn before we were back on trail. We were finally going to be back on the Appalachian Trail (AT) again! We rejoiced when we reached the split. It’s funny how much walking on this trail feels like home. From here on out, the Long Trail and the AT are one and the same until we arrive in Massachusetts. 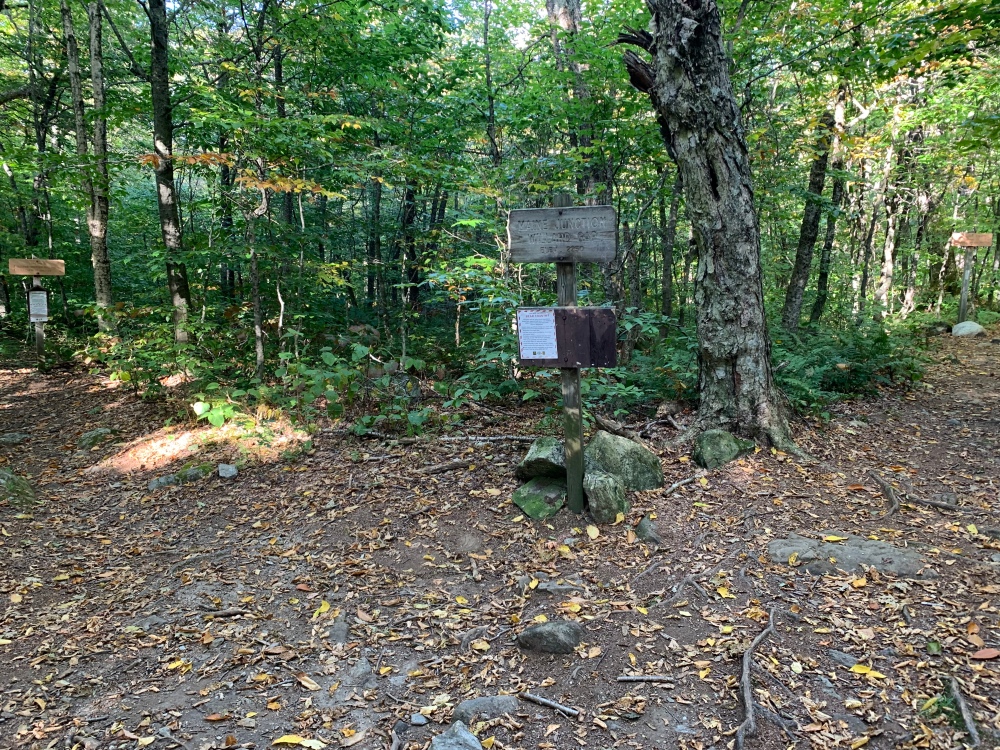 We were returning to Rutland and scored a hitch there with a woman named Katie. After she picked us up, she told us that today was her last day at her job and that when she saw me dancing, she felt like I was dancing for her! Her and her husband were going to be opening up a campground near North Adams, Massachusetts, and she told us if we were ever in the area again, we should check it out! She had a bunch of funny stories for the ride. She told us that she had hikers stay at their place and was convinced that one of them had pooped in their bed after eating Chinese food prior to their exit. They never found any poo, so chalk it up to gas, I suppose! She also told us how a homeless guy had stayed with them for what was supposed to be a brief period of time in order to get back on his feet. The guy ended up staying for about a year and they used the Thanksgiving holiday as an excuse to give him the boot. Understandably so, they don’t take in stray people anymore!

We got dropped off outside of the Yellow Deli restaurant and hostel. The occupants are members of the Twelve Tribes “spiritual community”, rumored to be a cult, but they’re quite friendly to hikers! They were in the midst of a sabbath celebration, so we had until 6 pm before we could return and get checked in.

We walked to Five Guys and stunk that place up as we scarfed down some burgers and fries. We returned to the Yellow Deli before 6, but we still managed to get checked into the hostel which was open. We got checked in by Aish, a guy we have met before during the annual AT “Trail Days” in Damascus, Virginia, and when we were at the hostel last time in 2017 when we were passing through. 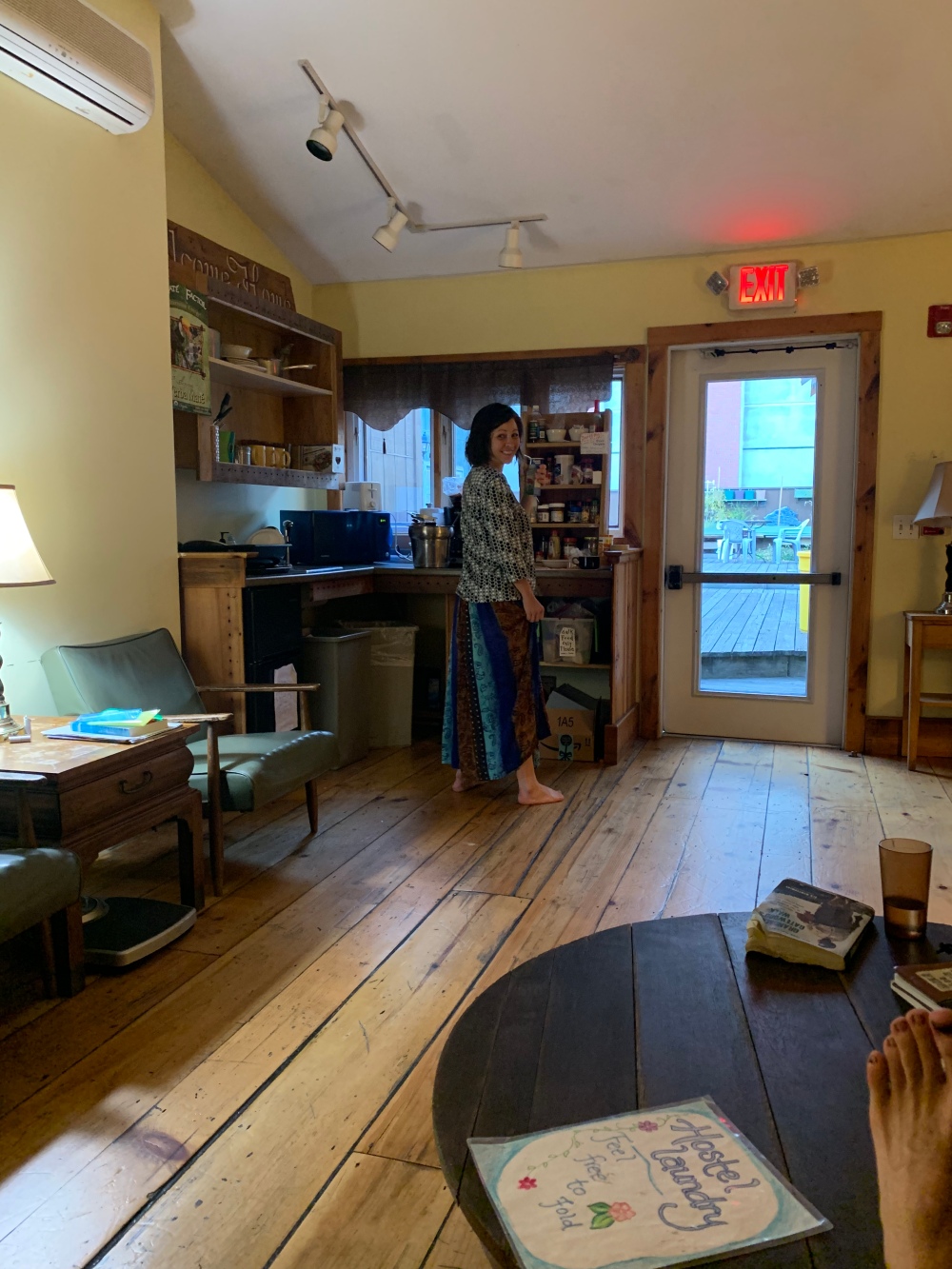 Me dressed up in my loaner clothes, waiting on my laundry.

After we got checked in, we showered off, did some laundry and talked to some of the other hikers that were staying there. One of them was a guy I met on the trail earlier named Tar Heel. He was meeting up with his wife in town. The people of the Twelve Tribes invited us to the sabbath celebration downstairs, but after our laundry was done, we ended up going out. Our hitch into town, Katie, had ‘stalked’ us on Instagram (her words not mine!), and invited us out to a bar down the street called Strangefellows Pub that she was going to with her husband. Katie, our “chauffeur” was a funny gal. Her text message to Middle Brother below:

“My husband will be wearing a purple pocket square, and I will be holding a single red rose.”

We walked over there with a hiker named Wit, who was recovering from an injury at the hostel. He was hiking the Long Trail northbound and was also an AT hiker during the same year as us in 2017. An AT hiker named Alps who was a bit behind schedule heading up to Maine also joined in later. Frisbee and I don’t drink anymore, and it was getting late, so we returned to the hostel to go to sleep. I was on the top floor with a girl who was heading home the next day after a Long Trail section hike, and Frisbee was downstairs with the rest of the guys. They separate men and women at the Yellow Deli hostel. It was the start of the weekend when everyone is blowing off steam after a long work week, so I’d get no sleep that night. The bar patrons outside my window were very active up until 4 in the morning.

Jump Ahead to The Long Trail: Part 14

Jump Back to The Long Trail: Part 12