The fun wasn’t over after thru hiking the BMT. I met up with some more of my favorite people at Amicalola Falls to hike a section of the AT. It was an awesome #hikertrash tramily reunion. I’ve missed these fools! The weather wasn’t so desirable, but we managed to dodge the worst of it by hiding out in Blairsville where we ate copious amounts of food. We made it to Franklin and got to pay it forward by providing trail magic. I think I enjoy providing trail magic more than receiving it, and that’s saying A LOT! This gal loves to eat! Up next... New Mexico!!!
March 26th 2021 - BMT complete! All we had was a short hike to Ironbridge Cafe for breakfast and coffee. Frisbee and I were stoked that Dr. Thunder showed up. He came in clutch shuttling us from Skeenah Gap to Blairsville to dodge the upcoming storm. Our zero day paid off and we had sunshine the entire 25 miles to the finish line!
We picked up “Grandpa” and hiked a pretty stretch of trail to a sweet campsite. Frisbee and I had our “unofficial” finish once we reached the Pinhoti Trail junction. Then we spent the night in a cemetery and Middle Brother nearly got shot by the hunter he startled the next morning. After a road walk, we slept at Indian Rock Shelter so we could get an early hitch into Blue Ridge to destroy McDonald’s. Most of us were out of food.
After an awesome visit to Reliance Fly and Tackle for coffee and food, we got to explore the rest of Reliance during our road walk. We picked up resupply and Grandpa at Ducktown the next day and enjoyed the sunshine... finally!
We escaped the rain by hiding in Ducktown, but the aftermath was flooded trail and a dangerous ford. We all made it across safely, including Lucy Lulu (a NOBO hiker we met at the crossing). It was still a pretty section and it included random goats and a lot of snakes. (Some video/photo credits: @trevtrevorwhatever @middlebrothersworld )
We timed it perfectly walking into Tapoco Tavern on opening day! The rain also waited to unleash until we found cover. We ate well then slept in a gazebo for the night. The next couple days were brutal. I busted my ass on the slick trail, twice! 😑The climbs were rough, the humidity was high, and the fog was thick. After fording a few creeks, my feet were battered. Time for a zero day!
We were wrapping up the Smokies and the
Our hike through the #GreatSmokyMountains has been awesome! Aside from the natural, the #bmt had taken us to some #historic sites and #ruins. We explored the Calhoun House built in 1928, foundation ruins and a old #car graveyard.
We’ve been having a blast in the Smokies and our buddy Chestnut even came out to do some miles with us! The first night was freezing and we had to ford some cold creeks, but it’s been beautiful!
Posted on October 30, 2019December 29, 2019 by Stubbs

I met with everyone downstairs in the Yellow Deli for the free hiker breakfast. Frisbee and I socialized with the 12 tribes members and the other hikers who joined us over granola. 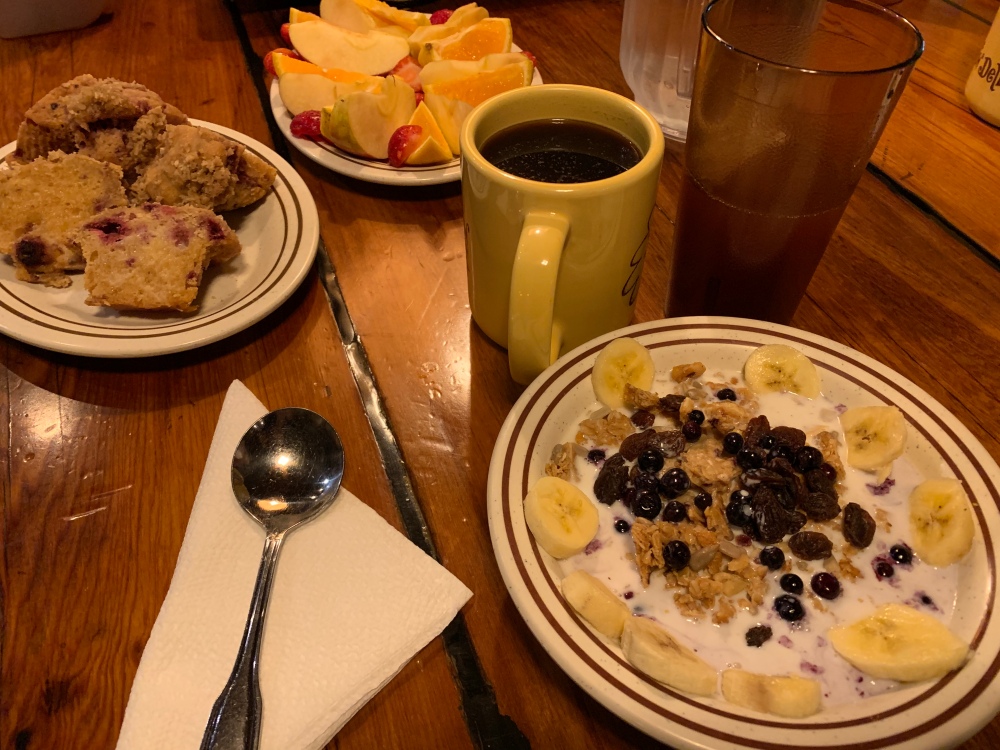 We picked the brains of the so-called cult members. I don’t agree with a lot of their views from what I gathered, but I was appreciative of their hospitality, even if it was intended to be a recruitment attempt. When I returned to my room, I noticed that a running event was underway below and they had rolled out sod on the street.

After a trip to Walmart to get a can of Spaghetti O’s, it was time to hitch back out to hike up and over Mount Killington. 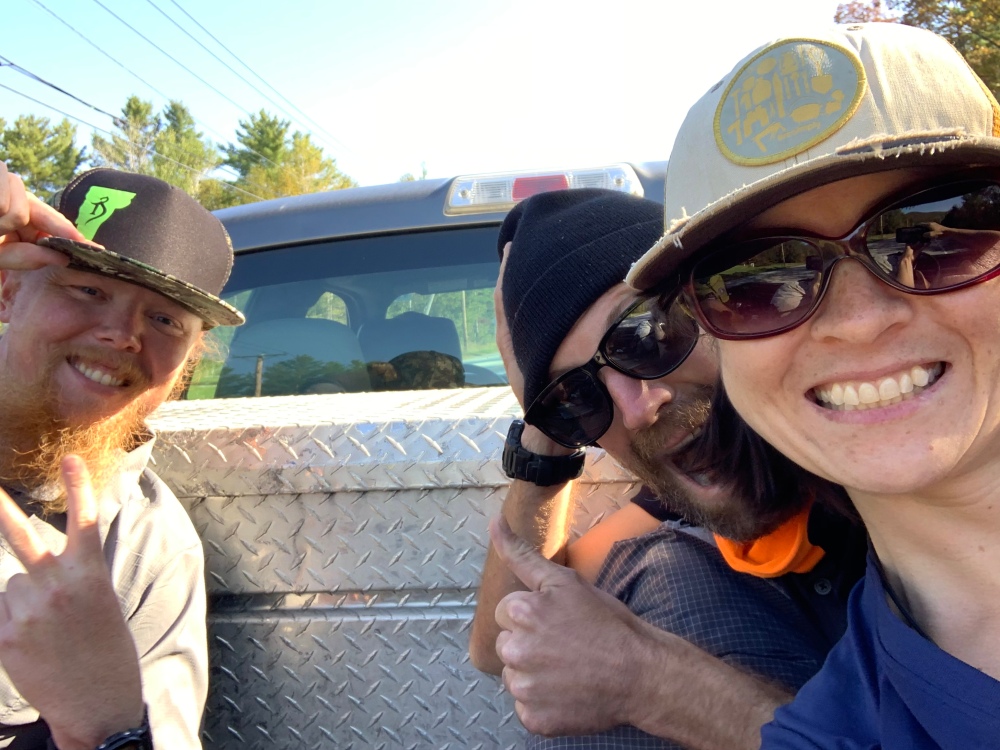 After catching a hitch back to the trail, I was feeling very weak. I was moving slower than normal up the mountain, so I was relieved when I reached the top and it flattened out for a while. I met the others at Cooper Lodge where we took a short break. We all agreed to skip the short, but incredibly steep climb to the summit of Mount Killington. It’s only about three-tenths of a mile, but we had been there, done that, and didn’t find it worth re-visiting. 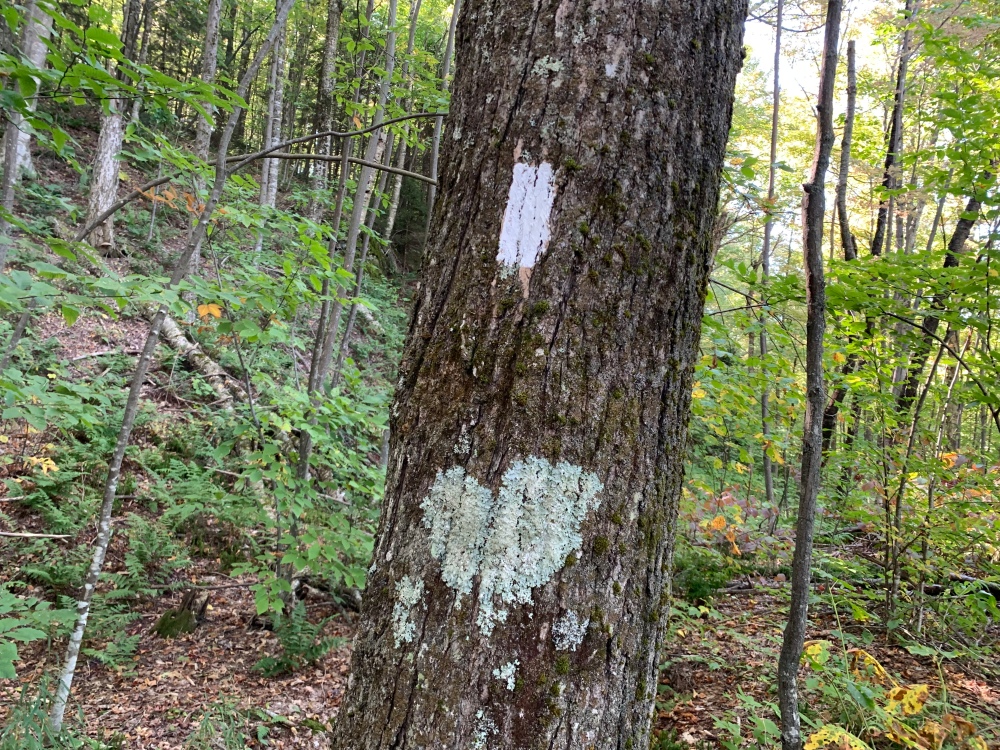 During the first few days of our hike, I noticed a dog tag labeled, “Charles” laying on a rock in the middle of the trail. Frisbee had been carrying it ever since with hopes of returning it to its owner. We’d finally get that opportunity when we met Charles, his owner, and the two other Long Trail hikers that were tagging along with them. After some small talk, they hiked on as we took a short break at Governor Clement Shelter. We only had 7 more miles to go on the day before we hitched back to Rutland. 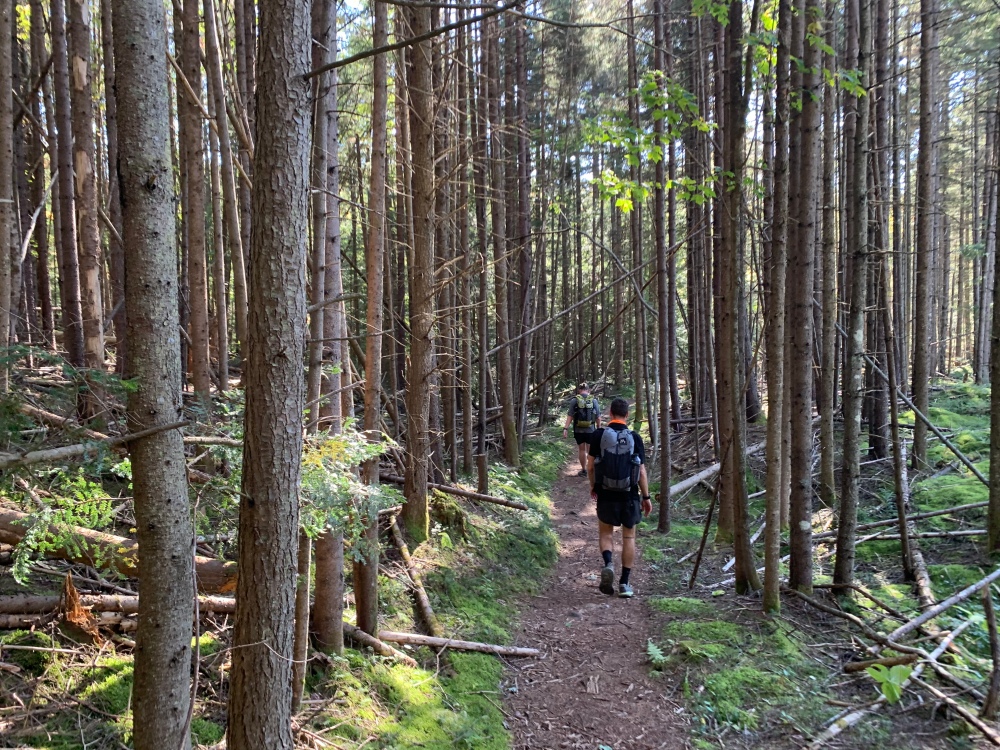 The majority of the hike was mellow, but we all suffered from some nasty knee pain during the steep descents. After passing the hikers we just met, and some more gnarly descents, we were relieved when we found ourselves back at the road. 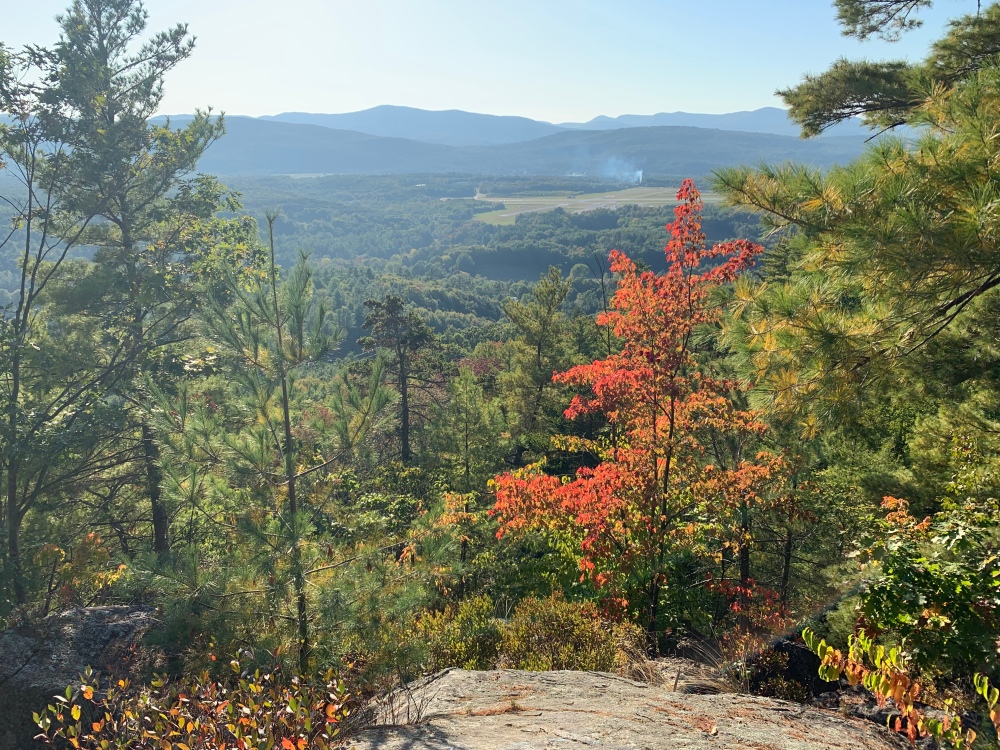 I thought it would be a challenge to get back to town from this location, but thanks to the day-hiker parking lot across the street, we got a ride back in no time.

We met two AT section hikers there who were visiting from their home in North Carolina. They had completed most of the AT, but had a few stretches in Vermont and in the south before it was official. Middle Brother rode with one of the guys, and Frisbee and I rode with the other. We had some fun conversations about the AT and traveling. These two guys were older, did not give off the appearance of being athletic by any means, but they had accomplished many miles on various trails and have seen several parts of the world. Middle Brother had an equally enjoyable ride back.

We got dropped off at Wendy’s to take advantage of their four-for-four meal deal. It included a four-piece chicken nugget, a drink or frosty, a small fry, and the choice of four different junior sandwiches. Each of us ended up purchasing two rounds. Hiker hunger should never be ignored!

Before returning to the hostel, we walked to ‘Ruff Life Coffee’ for some caffeine. After all the Maté tea I’d been drinking at the hostel, I probably should’ve passed. I was wired! I’d have another eventful night as I looked out of my window. There were loud outdated tunes blasting from the bar, drunken arguments, and police involvement involving the same girl on two different occasions.

She had a loud argument with a friend the first time around. The two of them told the cop that they were “just messing around” and weren’t really arguing. She was then told by the manager or owner of the bar, that she was banned from the premises for throwing threats at staff and patrons. She ‘ugly cried’ to her friend, telling him how mad she was. 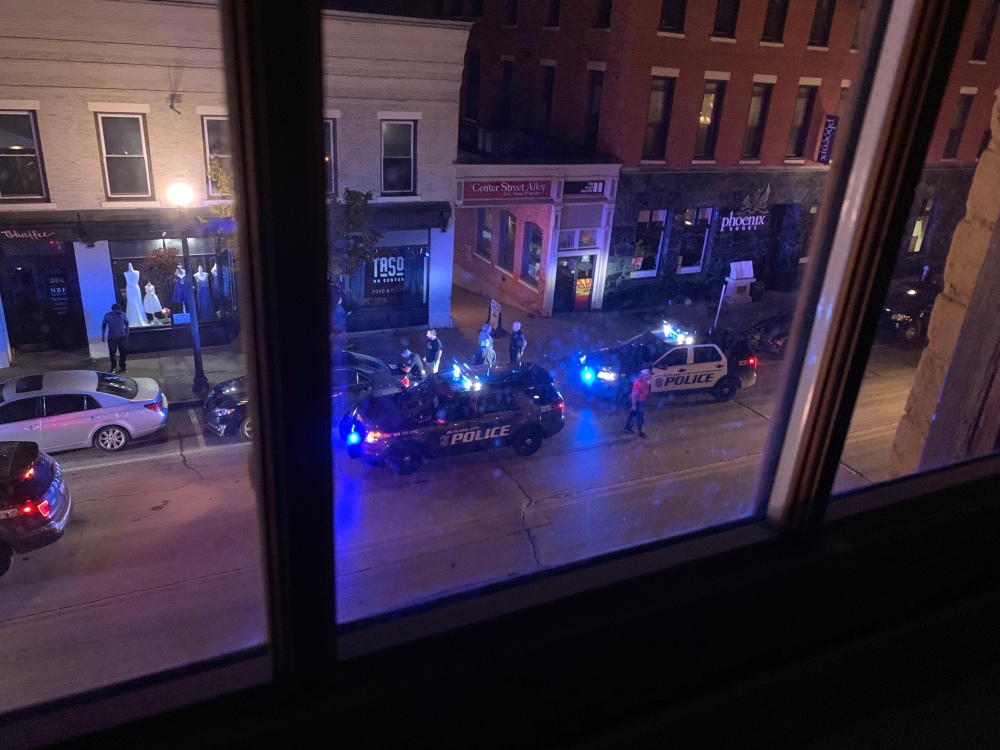 Later that night, I’d wake from my short snooze to police lights. The girl was being forced into a police car as she yelled at a skinny girl with a mohawk that was holding her head a several yards away. From what I gathered, the girl with the mohawk worked at the bar and was attacked by the culprit. Given the events that unfolded, I didn’t catch a wink of solid sleep all night.

Jump Ahead to The Long Trail: Part 15

Jump Back to The Long Trail: Part 13