The Cirque of the Towers Route left me speechless. 😶 All the views. ⛰ All the #rainbows . 🌈 All the #lakes . 🏊🏼 The Winds have stolen my heart. 😍
Had a good time in #lander then a horrible time back on trail climbing over the worst blowdown section I’ve ever crossed through. 😖 Our group got separated in the mix. The days that followed would make up for the headache. The Cirque of the Towers Route was amaze balls! 😍
The Basin. Pretty much just vast nothingness, a few pronghorn, and lots of cows. It was mostly dry and hot, although we did experience some thunderstorms. Also, my oxen broke a leg 🐂 and I have died of dysentery on the Oregon Trail.🤠 These things happen. 🤷🏻‍♀️
We hitched back from Encampment and accidentally camped on private property. 😬 Fortunately, the guy wasn’t mad when he found out we were CDT hikers and let us stay. Our views were hazy due to the wildfire smoke. 🔥 We passed through the affected area two days prior! A road walk to Rawlins followed, and we found ourselves herding cattle and dodging cow diarrhea. 🐂 💩 I was relieved to lay in a bed after inhaling some town food. I’ve been battling some nasty sciatic pain and blisters. Hiking through the basin wasn’t going to be too helpful.
One more state complete! Colorado was a blast and it was great to spend the last few days there with fellow AT hikers. Thanks again for the trail magic and the hospitality, @robinurthoughts and @urmygirl_blue You guys rock! Our #tramily has grown from 4 to 8 and we’re ready to take over Wyoming! Hammer down! 🤘
We destroyed some food when we reached Grand Lake. The damage from last year’s wildfires caused us to miss out on the bulk of the Rocky Mountain National Park section, which sucked. We also had to maneuver through many blowdowns, but the views during the climb up and down Parkview Lookout were amazing! The next day, we tackled a 37.4 mile day and made it to Steamboat Springs for the holiday weekend! 💥🇺🇸 🍔 Next stop, the Colorado-Wyoming border! 🤘
Sooo… we had to hike out of Winter Park otherwise we were gonna have to apply for employment. It was time! We weren’t too keen on hiking on top of mountains during a lightning storm, nor were we thrilled about the “impassible” blowdown section ahead. So instead, we connected the road from Berthoud Pass to the Fraser River Trail to the Fraser-Granby Trail. There was a lot of cool art, signage and wildlife along the way.
The climb to #grayspeak #summit was brutal, especially while having some of the worst altitude sickness in my life. 😵‍💫 But I fought off the nausea, gave my legs a pep talk and conquered my second 14er. The views were motivating, and the knifes edge before the final climb was awesome aside from the wind blowing me around like a plastic bag. The icing on the cake was seeing mountain goats during the hike down! ❤️
I was stoked to finally leave the very groomed Colorado Trail section so I could experience some new terrain. We had some big climbs, but we were rewarded with great views!
Posted on November 30, 2019December 29, 2019 by Stubbs

We were both in pain the next morning, but we continued our trek along Butler Mill Road.

After a snack break in Ada, we walked on until we made it to Mountain Hill Baptist Church, where we got water from the spigot and took a short nap in the sun with our feet elevated on the steps. 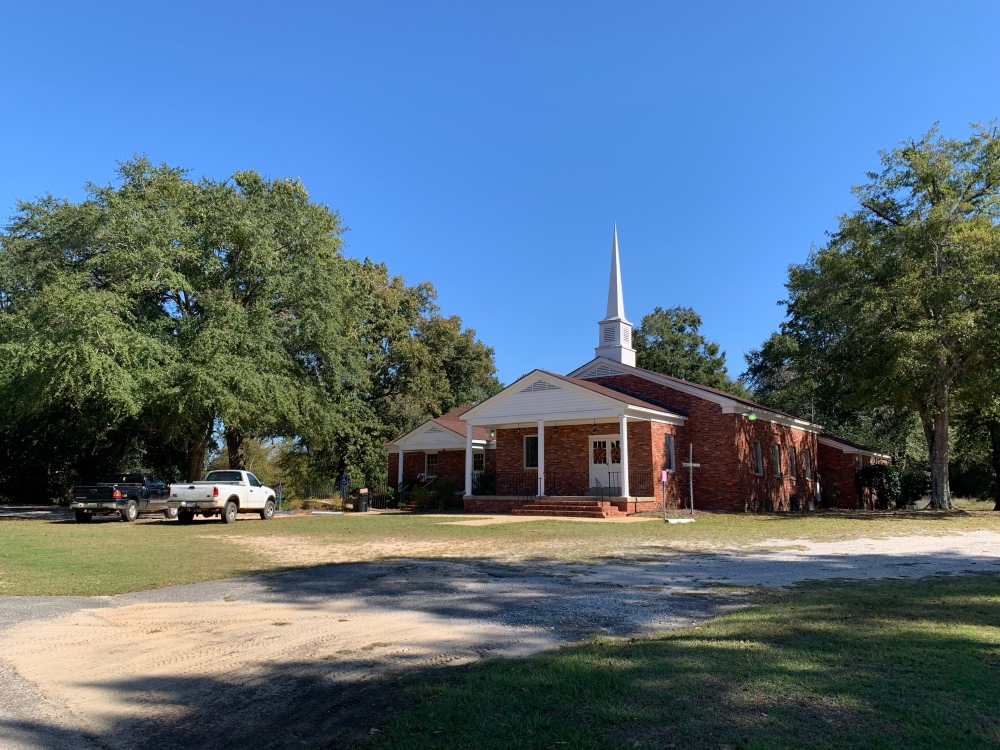 Shortly after we got adjusted, two church ladies showed up to straighten up after the fall fest celebration that recently took place there. One of them was named Susan and she brought along her pet chihuahua named Reese. She welcomed us and told us that they frequently help hikers out as they pass through, and have let them stay there in the past. We wouldn’t be staying there though. Our day was just getting started.

We took W Hickory Grove Road to Pettus Road to Upper Bozeman Road. The asphalt transitioned to dirt, and we listened to gun fire as we made our way to Magnolia Baptist Church where we took a lunch break. A cute dog followed us as we made our exit, and I worried that he would follow us across Route 97 to Burgundy Swamp Road. I didn’t want him to get struck by a car. Eventually he turned around and went back home.

Over two miles of road work followed as we dodged escorted cars and steamrollers. The road workers stopped to ask us where we were heading. When they heard we were walking to Key West, they had a lot more questions for us.

“Aren’t you worried about snakes?”

“Where do you sleep?”

“Do you want a pistol? There are a lot of crazies around here!”

We declined the pistol and kept walking. I was in a lot of pain. It felt like tiny saws were sliding back and forth across my toes as my nails lifted with each step. 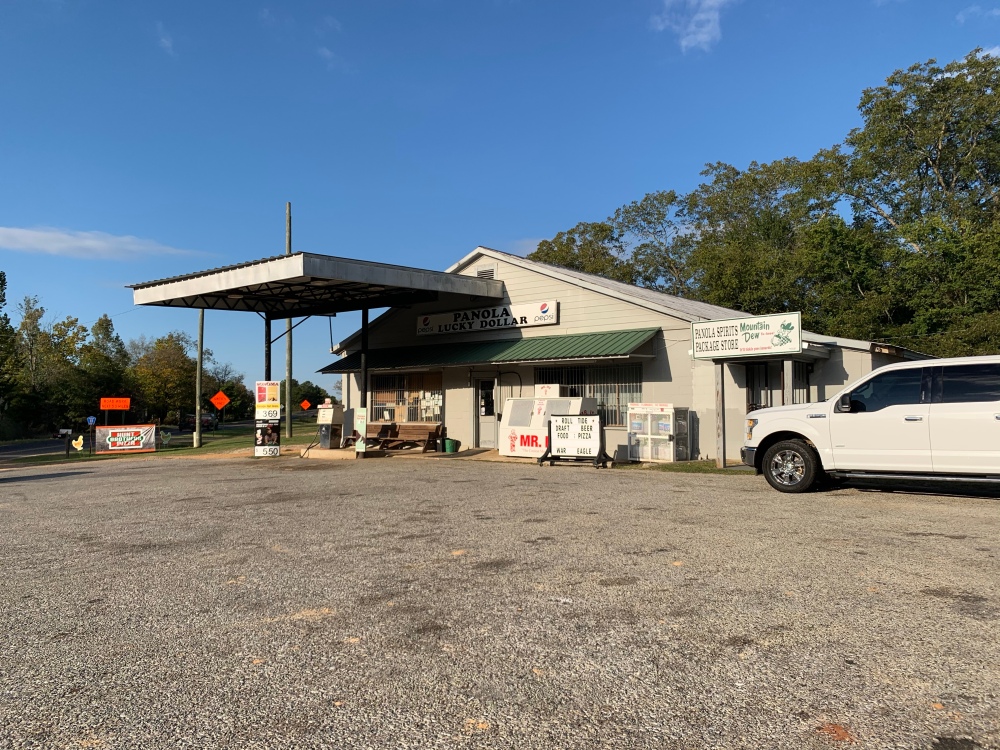 When we got to Panola, we grabbed a slice of pizza at the Panola Spirits and Package Store. Then we snuck across the street to hide behind the church. The back side was a little gross and there were roads surrounding it leaving us fairly exposed. I didn’t want to keep walking, but Frisbee told me it was up to me to call it. My feet were killing me, and I worried that I might regret it later, but I decided to continue on.

We walked by a house with three waving children and two curious adults riding them around one at a time on a dirt bike. They asked us about our hike.

“What do you do about the dogs?”

We were also offered a ride from one of the locals who looked like he was getting ready to go hunting. These are the interactions we experience all the time, and why a pistol is completely unnecessary. There are far more kind souls in this world than those with ill intentions.

After passing a field of kudzu, we made it to Meriwether Trail where Spring Creek Primitive Baptist Church stood. This was a far better location than the one in Panola. As we set up, we kept hearing noises that sounded like they were coming from inside the church, but there was no one there.

We were both hurt. Frisbees back was in bad shape and his arm was numb. I drained the blisters under my toenails and gritted my teeth as I doused them with hand sanitizer. I was hoping the nails would fall off tomorrow and that we’d both feel better by then. I hoped.

Jump Ahead to The Alabama Road Walk – Part 6

Jump Back to The Alabama Road Walk – Part 4