The Cirque of the Towers Route left me speechless. 😶 All the views. ⛰ All the #rainbows . 🌈 All the #lakes . 🏊🏼 The Winds have stolen my heart. 😍
Had a good time in #lander then a horrible time back on trail climbing over the worst blowdown section I’ve ever crossed through. 😖 Our group got separated in the mix. The days that followed would make up for the headache. The Cirque of the Towers Route was amaze balls! 😍
The Basin. Pretty much just vast nothingness, a few pronghorn, and lots of cows. It was mostly dry and hot, although we did experience some thunderstorms. Also, my oxen broke a leg 🐂 and I have died of dysentery on the Oregon Trail.🤠 These things happen. 🤷🏻‍♀️
We hitched back from Encampment and accidentally camped on private property. 😬 Fortunately, the guy wasn’t mad when he found out we were CDT hikers and let us stay. Our views were hazy due to the wildfire smoke. 🔥 We passed through the affected area two days prior! A road walk to Rawlins followed, and we found ourselves herding cattle and dodging cow diarrhea. 🐂 💩 I was relieved to lay in a bed after inhaling some town food. I’ve been battling some nasty sciatic pain and blisters. Hiking through the basin wasn’t going to be too helpful.
One more state complete! Colorado was a blast and it was great to spend the last few days there with fellow AT hikers. Thanks again for the trail magic and the hospitality, @robinurthoughts and @urmygirl_blue You guys rock! Our #tramily has grown from 4 to 8 and we’re ready to take over Wyoming! Hammer down! 🤘
We destroyed some food when we reached Grand Lake. The damage from last year’s wildfires caused us to miss out on the bulk of the Rocky Mountain National Park section, which sucked. We also had to maneuver through many blowdowns, but the views during the climb up and down Parkview Lookout were amazing! The next day, we tackled a 37.4 mile day and made it to Steamboat Springs for the holiday weekend! 💥🇺🇸 🍔 Next stop, the Colorado-Wyoming border! 🤘
Sooo… we had to hike out of Winter Park otherwise we were gonna have to apply for employment. It was time! We weren’t too keen on hiking on top of mountains during a lightning storm, nor were we thrilled about the “impassible” blowdown section ahead. So instead, we connected the road from Berthoud Pass to the Fraser River Trail to the Fraser-Granby Trail. There was a lot of cool art, signage and wildlife along the way.
The climb to #grayspeak #summit was brutal, especially while having some of the worst altitude sickness in my life. 😵‍💫 But I fought off the nausea, gave my legs a pep talk and conquered my second 14er. The views were motivating, and the knifes edge before the final climb was awesome aside from the wind blowing me around like a plastic bag. The icing on the cake was seeing mountain goats during the hike down! ❤️
I was stoked to finally leave the very groomed Colorado Trail section so I could experience some new terrain. We had some big climbs, but we were rewarded with great views!
Posted on December 8, 2019December 29, 2019 by Stubbs

It rained overnight and was freezing when we stepped outside that morning. We grabbed breakfast at Huddle House, then returned to our warm motel room. Eventually we came out of hibernation, and hiked out in the freezing cold, windy weather to resupply. We were feeling quite miserable.

While walking down Route 29, we got a surprise visit from Bromwyn who decided to track us down. She wanted to give us her contact in case we needed help. That was super sweet of her for looking out! She’s just one example of the kind and caring individuals we cross paths with during our hikes.

We made a pit stop at Fletcher’s, a quirky convenience store with wild game statues and funny signs lining the walls. It looked like there was going to be a whole lot of nothing ahead, so we tried to warm up in the sun with some hot coffees.

The sun warmed us up briefly, then the temperature dropped again. As we passed our last gas station, a lady in a pickup truck pulled over and offered us a ride.

Her eyes got wide and she jolted back in shock as she responded, “KEY WEST?!”

This reoccurring reaction never failed to make me smile with amusement.

“Are you sure you don’t need a ride? There’s a lot of evil people out there.”

“While being out here, we’ve learned that the good people outnumber the bad, but thank you.”

“Alright,” she said, looking concerned. “Be safe. I’ll pray for you.”

Frisbee replied, “Thanks and Roll Tide!”

She was wearing an Alabama University shirt.

“Roll Tide!” she cheered before driving off.

As we dodged tractor trailers walking along a shoulder-less highway, I was fascinated by the roadkill. I just about saw one of each animal dead on the side of the road with no repeats. A skunk, squirrel, snake, cat, fox, raccoon, armadillo, you name it. I told Frisbee I’ve seen just about everything but a dog. Shortly after saying this, we approached a dead dog on the side of the road.

We were both hating life. Road walks on busy highways, especially for such a long stretches of time, are not fun. Just locating a private place to pee is challenging let alone avoiding rolling your ankle on lumpy, uneven ground while dodging traffic. 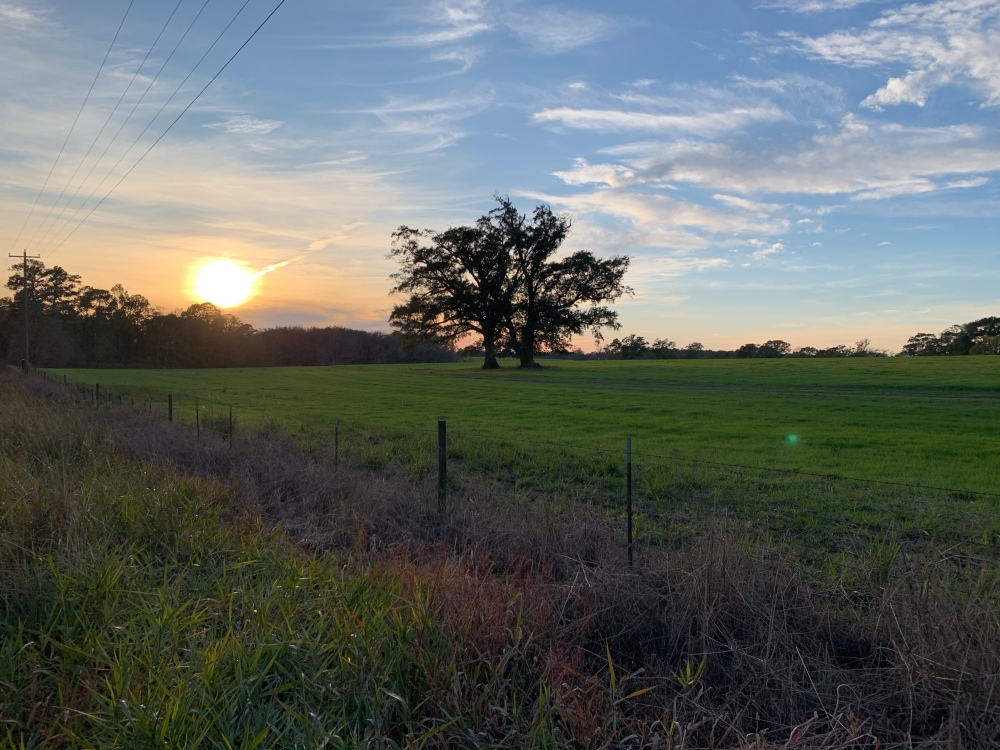 It was beginning to get dark and we were still scoping the woods for a good stealth spot as we proceeded. Ahead of us, we saw a car pull over and a little old lady got out of the driver’s seat. She said she had seen us walking and wanted to give us a ride. We thanked her, and told her that we were walking intentionally, headed to Key West. Then she offered us a yard to camp in. We considered walking there, but changed our minds when she said her place was two miles off the highway. Then she offered to drive us, feed us soup, and was willing to drive us back in the morning.

“You had me at soup,” Frisbee told her.

Her name was Bonita and she took us to her old house, and let us sleep in her garage which had a bathroom attached to it. A frost warning was in effect for the night, so this was great!

“I can turn on the hot water for you two, and you can take a shower if you’d like.”

Bonita had been falling down and getting herself hurt, so she currently lived down the street with one of her adult children. The entire street housed family members, and she had a huge family. When she left to get soup, we knew for sure she was going to be in deep trouble with them for picking up two strays off the side of the road!

Sure enough, she returned with soup, ham sandwiches, two toy poodles, and two grandsons packing heat! They let their guard down once they got to know us. We weren’t a threat.

As she was microwaving our soup, one of her daughters called to yell at her.

“They’re good people, I just know it! I’m putting you on speaker phone!”

We said hello, told her about the Eastern Continental Trail (ECT) and joked about how we tried to turn down Bonita’s offer, but that she wouldn’t take no for an answer.

“Take me off speaker phone!”

Bonita bickered with her daughter for a few more minutes as we ate, then we returned to the garage. The boys were about to lug out some old mattresses and the angry daughters showed up shortly after to check us out. We laughed and chatted about the situation with them, and I think they left feeling a lot more comfortable about it. We weren’t meth heads or shady individuals.

“We told her she was gonna get in trouble!”

We were beyond grateful as we watched the trees blow around in the cold wind out the garage window.

Jump Ahead to The Alabama Road Walk to the Florida Trail

Jump Back to The Alabama Road Walk – Part 8