The Florida Trail was finally finished, but our journey was far from over. We had a long walk to the southernmost point of Florida; Key West. We wanted to start off fresh, so we decided not to leave just yet. We lingered around Oasis Visitor Center, and planned on leaving once the danger of rush hour traffic had past. We sat on the picnic table and fed the crows some of our extra tortillas. They would follow us around all day. 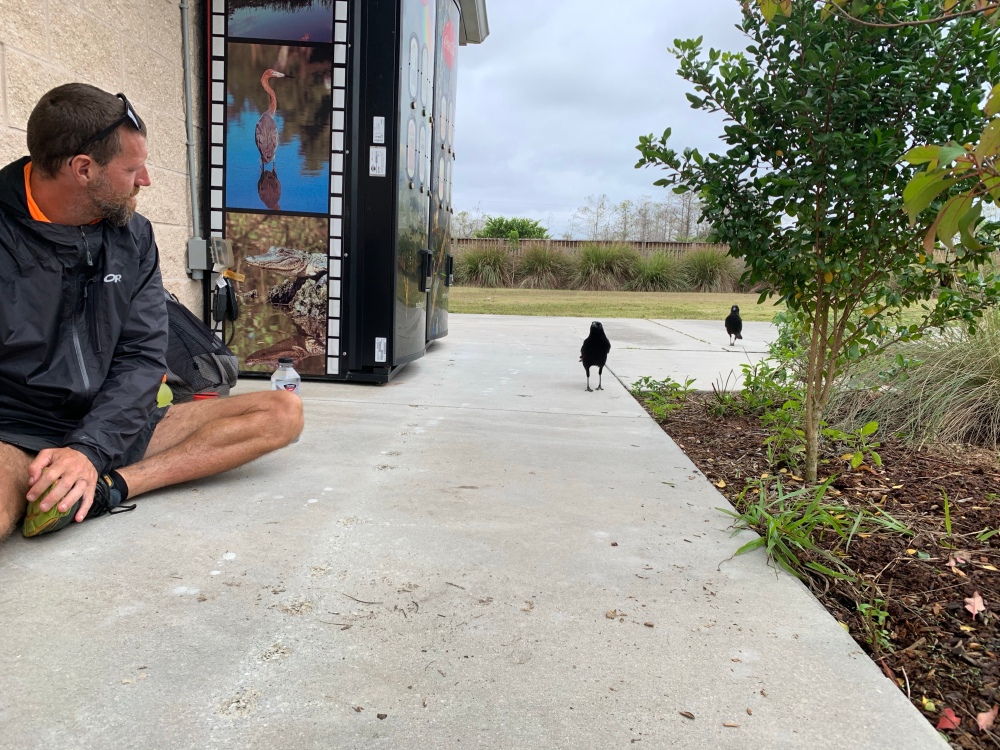 We also go to know the staff at the Oasis Visitor Center. Lisa Andrews was a ranger who runs tours with children who are visiting on field trips. One of the things involved in her tour with them is that they track a Florida Panther. She takes the kids through the swamp to track down one of them using a tracking device and GPS, much to the horror of the parents. The truth later comes out that the “panther” they’re tracking is actually a stuffed animal wearing one of the tracking collars. A cute idea if you ask me! They use the same equipment that they use for tracking ‘real’ panthers during their search. Lisa was easy to talk to and shared some of her travel stories through Borneo, the British Virgin Islands, and Peru. She travels often with her brother.

The Oasis Visitor Center receptionist, who’s name I wish I had gotten, was incredibly friendly as well. She showed us pictures of a Burmese python 2 miles out in the ocean that was caught by a fisherman. Burmese pythons are an invasive species that Florida has been battling for years. They have significantly damaged Florida’s ecosystem, and they eat everything! There’s actually a bounty for killing them in an attempt to restore the habitat in Florida’s Everglades. We have been lucky enough not to see any!

Another ranger at the Oasis Visitor Center was Don Cook. He suggested we return to the area to go on a canoe trips around the Everglades. He showed us a good route for a multi-day trip. We plan on doing just that! His wife is a ranger as well, and they’ve enjoyed the area so much, they’re looking into moving to South Florida full time! Don also had some awesome stories to tell. Everyone at the visitor center was really cool.

As we waited for it to get dark, we ate some more, and went to the auditorium to charge our electronics and to watch the park service film, which actually featured Lisa on one of her tours. The staff was awesome and didn’t mind us loitering around. There was rain in the forecast. Wonderful. And the longer we lingered, the more tired we got. When Don left for the day, he told us that if we were still around, he would bring us some pizza. He was a man of his word! Thanks Don! You’re the man!

He stopped by with his wife and wished us a safe journey. Camping is not allowed at the visitor center, but we asked if it would be alright if we took a power nap away from the parking lot. He said that shouldn’t be an issue. We were going to rest a few hours, then begin our long walk in the middle of the night.

Jump Ahead to Road Walk to Key West: Chapter 2

Jump Back to Return to the Florida Trail: Chapter 30