After an excellent view from our hotel rooftop as we ate breakfast, we would wander through town so I could swing by the pharmacy, and so Bennie and Verena could go shopping. 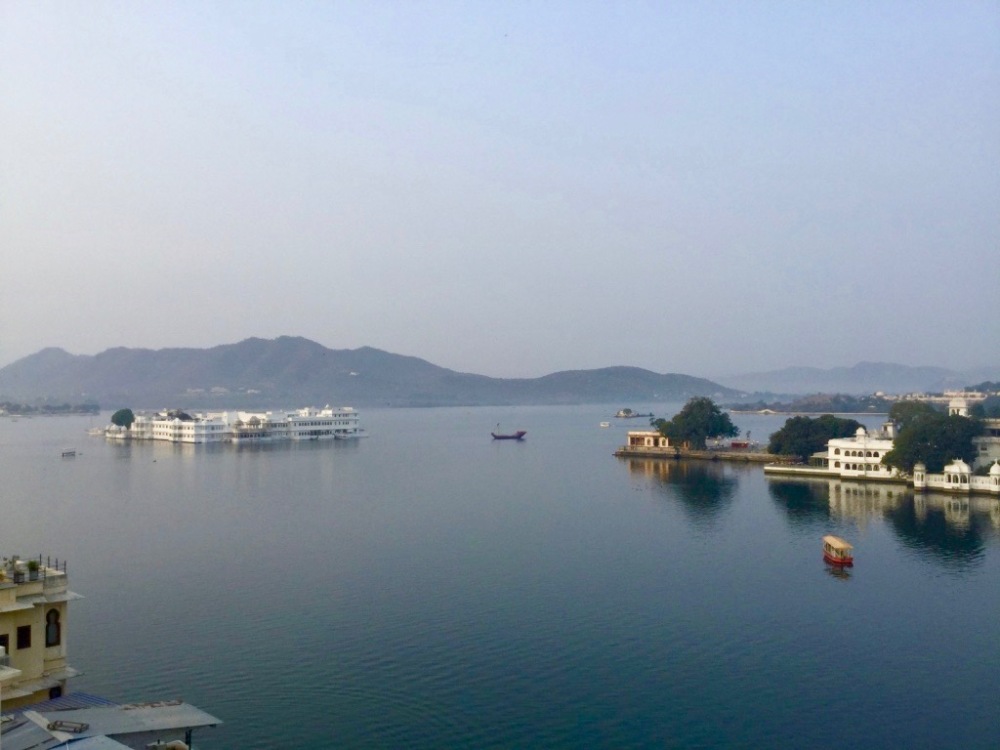 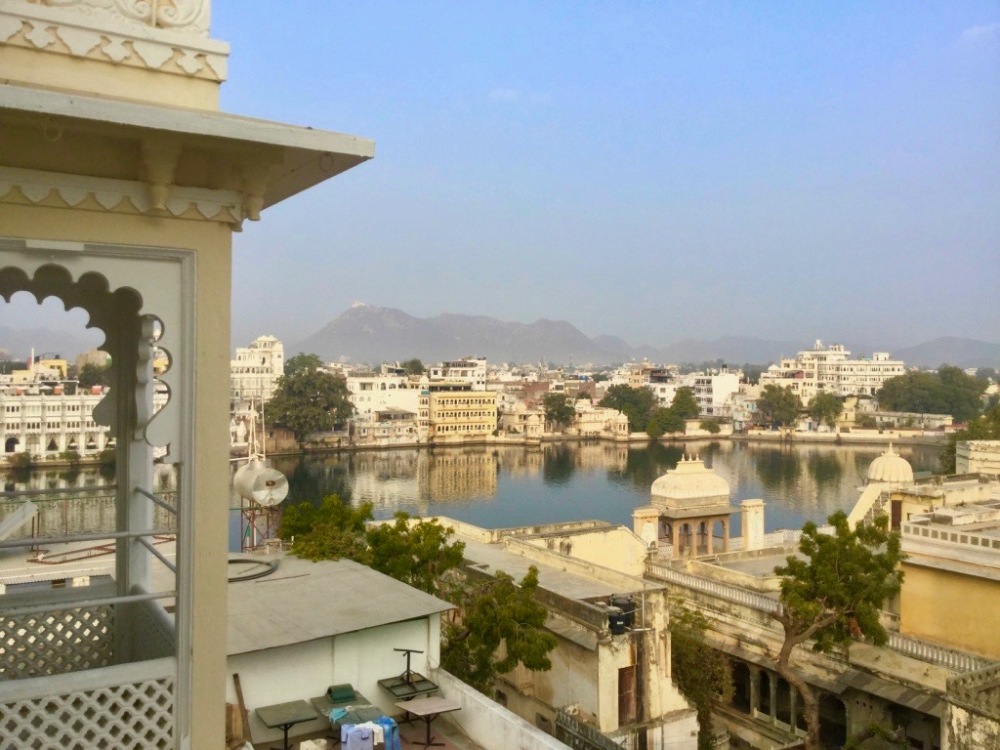 On our way, we were startled after witnessing a parade of people walk through the streets with women carrying pots on their heads. One of the women dropped the pot  and it shattered loudly on the ground. If that wasn’t alarming enough, she then began swirling her head and torso around wildly as if in a trance while grinning ear-to-ear. A man nearby began throwing coconut water on top of her head. I initially thought the women needed medical attention during her seizure-like behavior, but quickly realized that this was all part of some sort of a ritual. 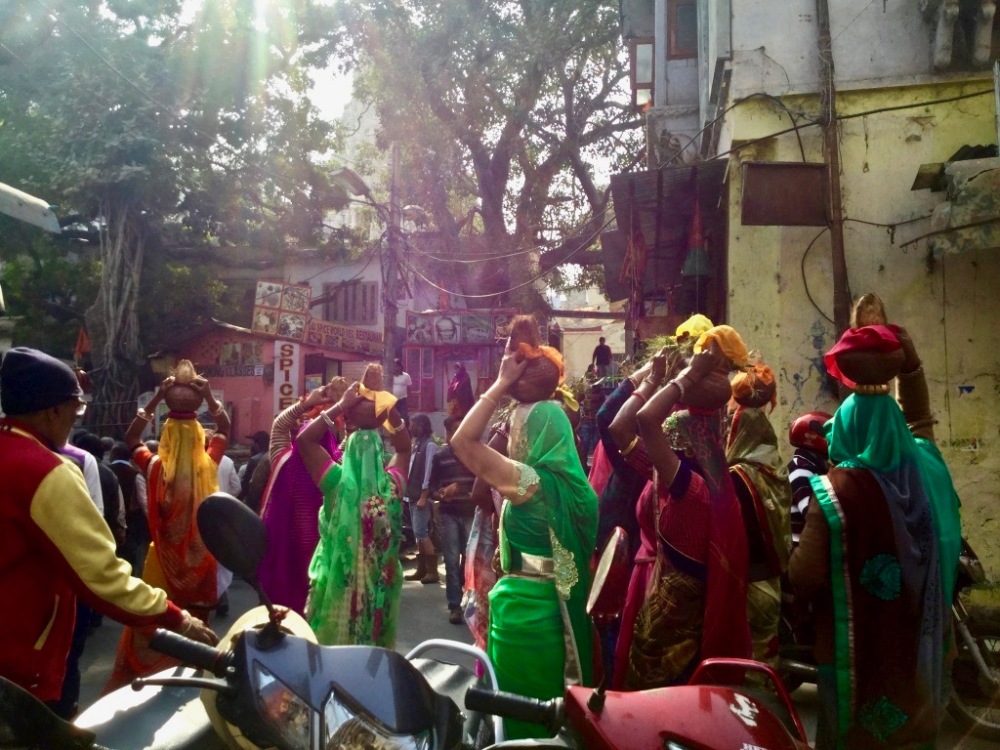 Bennie was on a mission to find a temple that he had seen on the way into town. We wandered along the lake and through the streets of Udaipur until we were able to locate it. 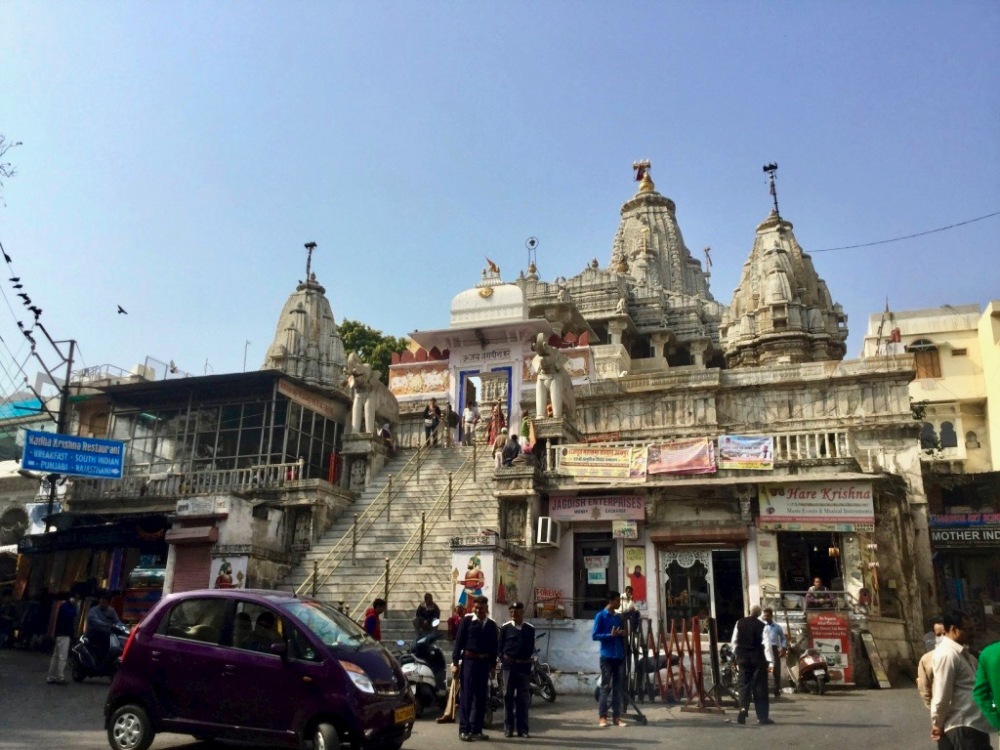 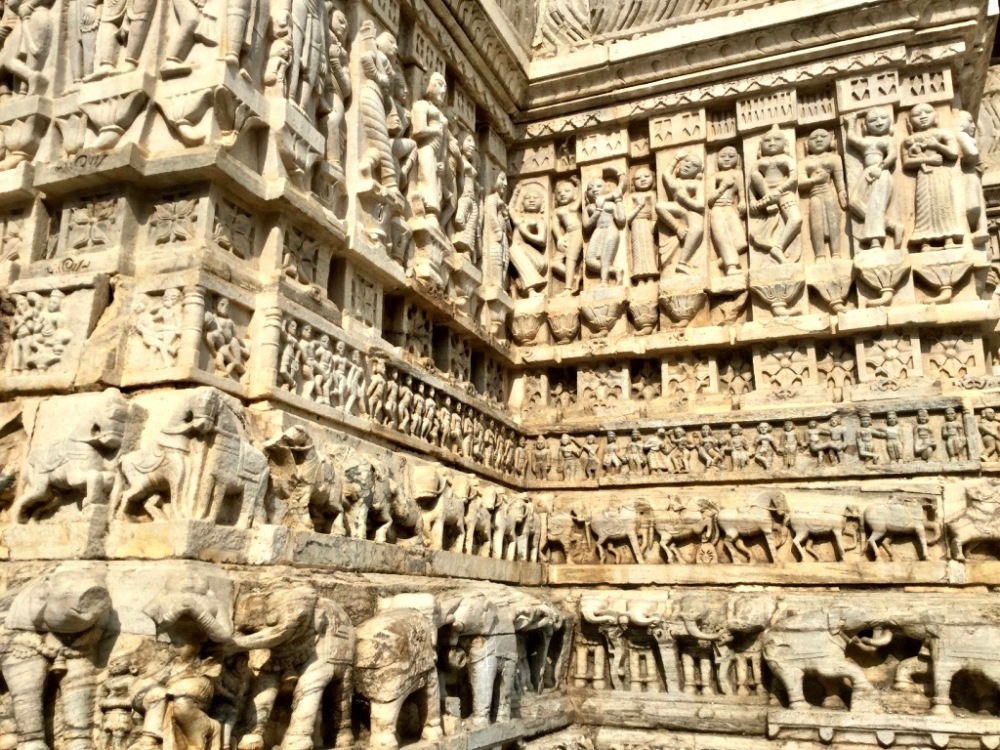 We also were able to track down the pens that we had intended on giving to Rick before his departure. I didn’t want to go through the trouble of mailing them as a gag, so instead, I just e-mailed him a picture to let him know that we were thinking about him.

After walking through the temple, we were all feeling a little weary when a man pulled us aside to take us down an un-lit hallway. I started questioning if this was the moment we would be mugged, until we found ourselves in a hidden gift shop. Surprise! You’re not dead, but please buy!

Bennie and Verena continued their shopping spree (those two crazy kids loved shopping!), while we went with Carmel and Amelia to explore the city further. We thought we had gotten ourselves lost while wandering through the many alleyways of Udaipur until one of them spit us out right in front of our hotel. We continued exploring once we were re-oriented.

A guy professed his love for Amelia while we moseyed around some shops, and was starting to become a bit of a creeper. We kept a close eye on her as the weirdo refused to take no for an answer, and slowly putted behind us on his motorbike with his friend on the back. We managed to get away from them after dipping into a restaurant called “Grasswood.” It would soon become one of our favorites.

After relaxing inside with some coffees, mango lassis and strawberry shakes, we were getting hungry and wanted to give a different restaurant a try. So we left, heading across the bridge to avoid Amelia’s boyfriend. No worthy restaurants were in sight, however we did come across the remains of a car that looked like it caught on fire. We made our way back across the bridge dodging Amelia’s “lover boy” yet again. After passing many places advertising Jame Bond flicks (“Octopussy” was filmed here), Trevor would suggest that we check out the “Lakeview Paying Guest House.”

As we walked up the shady stairwell, we passed a pipe that was leaking all over the floor. I suddenly was doubting Trevor’s judgement, but many, many steps later, we made it to the rooftop. It had to have been one of the highest rooftop restaurants in the city. We had an incredible 360 degree view of Udaipur!

Unfortunately the food was pretty awful. They all ordered pizza that was undercooked with sauce that stained their fingers. I went with an Asian-style spaghetti instead which was better, but was still pretty mediocre. After taking in the scenery over a couple beers, we returned to our hotel room to veg out. 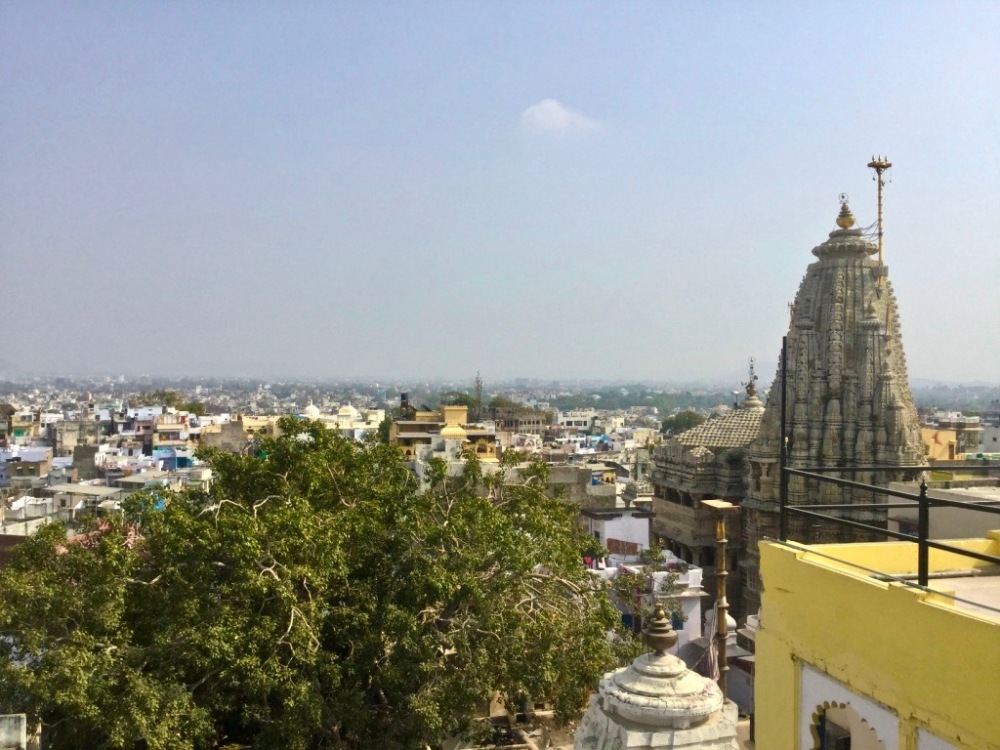 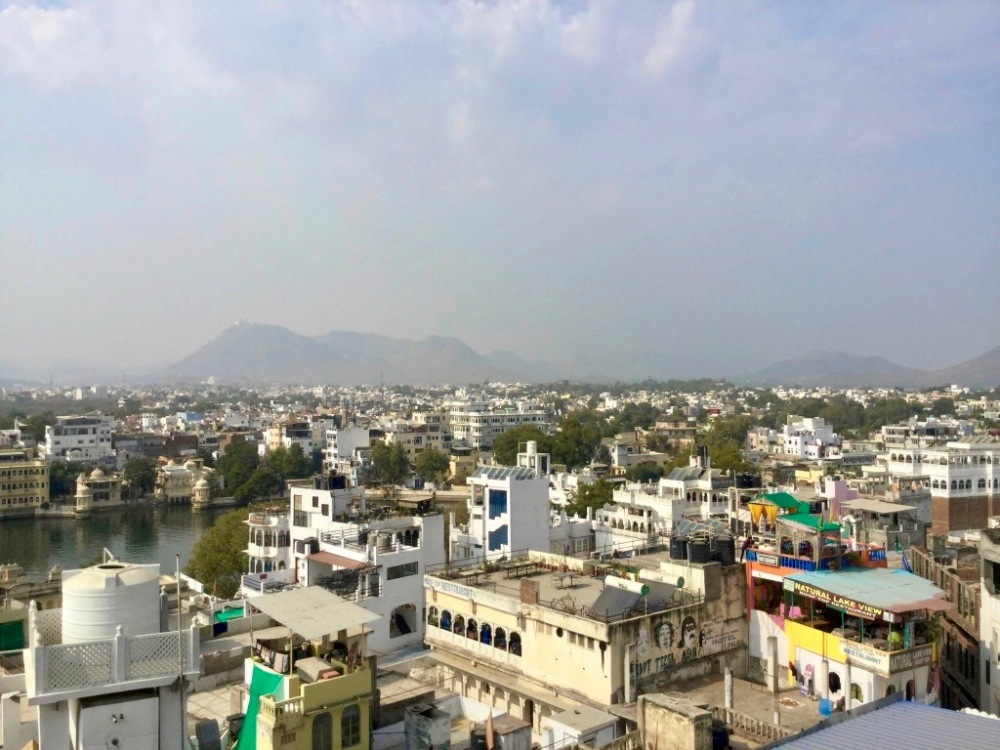 Later, we went on a mission to find the local wine shop with the Aussies. It had been suggested that we take a rickshaw to get there, but Harsh told us it was a mere 15 minute walk away. We all took off, forgetting to ask for a very key piece of information. None of us knew how to get there!

After meandering a while hoping we’d stumble across it, we gave up and flagged down a rickshaw driver. After an incredibly short ride up the road, we would all be pissed at ourselves for not carrying on a little further. We were so close. We approached the shady, gated shop door to buy our booze, then walked back to enjoy drinks in the hotel lounge area.

After getting nice and toasty, we joined the others next door to eat with the whole group at “Kankarwa Haveli” where they had a fixed meal of rice, naan, palak aloo (spinach and potatoes), paneer pea masala, dal (lentils), and a chicken dish that Trevor and I skipped out on since we were currently on a vegetarian kick. As we dined, we could see a wedding taking place across the lake on Jag Niwas Island. The island was lit up like a carnival, and we enjoyed some fireworks that were set off for the celebration.

Everyone was having a very pleasant night at first. We were all socializing and getting along, but then we all received the bill. They had tacked on a hefty tourist tax, as well as an alcohol tax to everyones order. Several people also received the wrong change back after paying. It was an all out uproar! Carmel wasn’t so concerned about the bill itself, but we all agreed that it made absolutely no sense to charge her sister with an alcohol tax on the non-alcoholic “mocktail” she ordered.

After it was all sorted out, we all returned to the hotel. Some of us hung out in the lounge area and watched “Kill Bill: Volume 2″ on TV. Right before heading to bed, a water pipe busted nearby the lounge area, which Harsh struggled to fix as we passed through the labyrinth back to our room to crash out.

Jump Back to Part 25: Jainism, Spaceballs & A Labyrinth