After spending a little too long out in the so-called “real world”, it was so damn refreshing to meet up with some of my tribe for a multi-day hike on my home trail. To those CDT tram members who couldn’t make it out, you were truly missed and gossiped about… A LOT! 😂 But I’m hoping some of you cross paths with us on the PCT later this year. Good luck Tapeworm on making it over halfway on the AT. 🔥 Enjoy the north. RIP The Doyle. You will do well I’m certain, but I’ll miss the glorious shitshow you once were. How the trail has changed! 🤯
I did a thing today. Probably won’t do it again. But I also said I wouldn’t run 13.1 miles ever again, sooo… 🤷🏻‍♀️Thanks @trevtrevorwhatever for the support, and super rad to catch up with you @wildturkeytrotsthru Thanks for the hospitality!
9/9/21 - Mission Accomplished! 🤘
Montana! You pretty!
Yet again, Montana brought the hiker friendliness in Augusta, and a sweet sunset too! Once we were able to force ourselves to leave, we were off to “The Bob” and finally got to see the Chinese Wall. We’re officially in the heart of grizzly country, y’all! 🐻
The sweet views continued all the way to Augusta!
Had an awesome birthday which I celebrated with my stinky, freeloading #hikertrash tramily, the wonderful people of Lincoln, and Daryl the Sasquatch. The hike from Rogers Pass was just as amazing as the hike into it after we hunkered down in a yurt to avoid the rain. More climbs, but a lot of ridge walking by rock ledges and towers.
No more smoke, but the days have been windy and the nights have been cold. We visited an amazing outfitter in the middle of the trail, got to see Golden, a familiar face from the AT (2016), and lots and lots of cows! I had been in a bit of a funk lately, but the ridge walk right before reaching Rogers Pass snapped me out of it!
Got stuck in the Butte vortex. We hitched in, hitched out, hiked to the north side then hitched back in. Pizza Ranch was our second home. Eventually we made our way to Helena, our second vortex. Before our arrival, we got pounded by hail and rain. The wind was blasting through the trees so hard, they were snapping like twigs behind us. The people of Helena were beyond hiker friendly. We got stuck a second day when a girl working at the brewery let us crash at her place for free, hot tub included! Life’s good!
Posted on October 1, 2018October 5, 2018 by Stubbs

Earlier this year, I had requested 10 consecutive days off from work to complete the remaining 170 miles of the Appalachian Trail (AT) that I still hadn’t executed due to injuries. I’d be pressed for time and would have to push some lengthy miles on most days, but it would be enough.

Unfortunately, I’d be blindsided with some delightful news immediately before leaving on my paid vacation. Due to conflicts of the monetary variety, there were several people laid off from work at my job. I was one of the lucky few who made the cut. On the bright side, time was no longer an obstacle!

Side note: I managed to get a new job lined up upon my return. Also, being a good employee apparently pays off since I was still given my PTO (paid time off) regardless. In short: Life is good.

Our buddy Brad dropped us off at Delaware Water Gap, PA  where we’d stay for the night in order to get a fresh start first thing in the morning. It was nice to see those white blazes again. I have conflicted feelings about the AT, but it always feels like returning home. 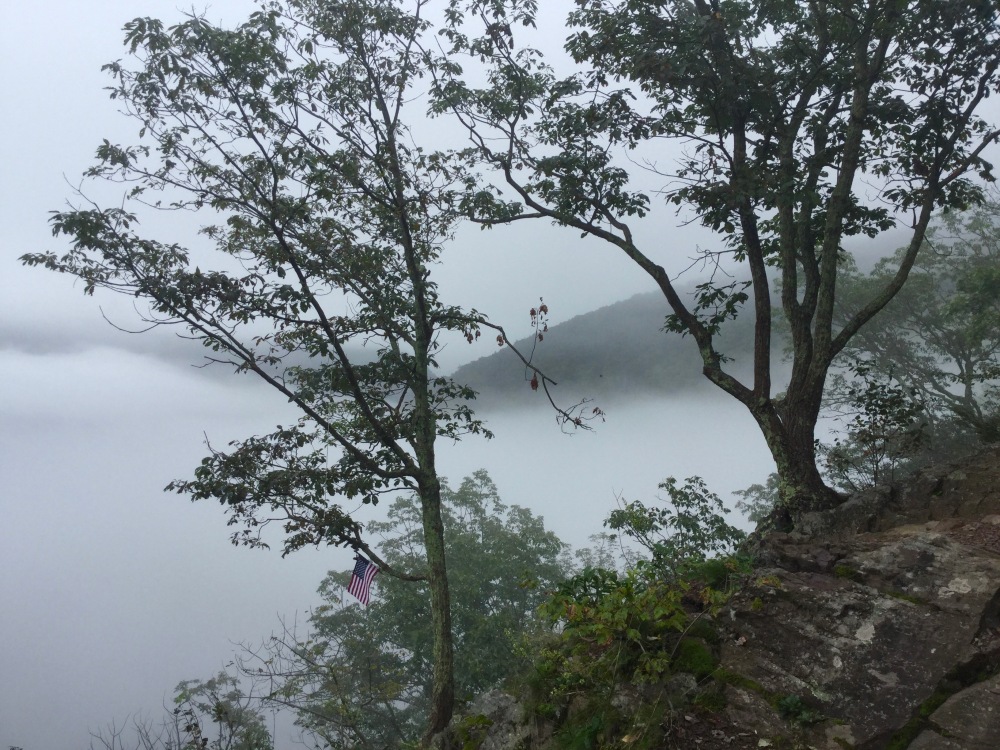 It was super cloudy out, but I was hiking strong. The terrain got rockier as we continued southbound. They call the Pennsylvania section “Rocksylvania” for good reason!

We’d pass a few potential lookouts and views before taking a break at Kirkwood Shelter for lunch. Sadly, it was a complete white out, so no scenic rewards.

There were a few scattered showers during the first half of the hike, but as we started to approach Wind Gap, the sky unleashed! It dumped rain on us all the way to Leroy A. Smith Shelter where we’d be ending our day. I was very relieved to get there and dry off. Not only does it suck royally to hike in the pouring rain, but I was beginning to run out of steam.

There was only one other person sharing the shelter with us. His name was Monk and he was a flip flopper* who was originally from Pittsburgh, but had been living in Colorado during his more recent years. He said he had been missing the trees on the east coast. This was one of his motivations for attempting a thru hike on the AT in particular. He informed us that he had seen a black rat snake drinking water from a puddle out front. After seeing Monk, it made its way under the shelter. Hey, shelter snakes mean no mice!

We’d try to catch water from the roof in the middle of the night which would fail to work out to our benefit. Frisbee will be sleeping poorly the next few nights. His sleep pad was deflated.

*Some people hike the AT northbound (NOBO, for short), other hike southbound (SOBO), and then there are people who will start hiking in one direction, then “flip” and hike the rest of the trail in another which is called a “Flip Flop“.

Jump Ahead to Part 2