9/9/21 - Mission Accomplished! 🤘
Damn Montana! You pretty!
Yet again, Montana brought the hiker friendliness in Augusta, and a sweet sunset too! Once we were able to force ourselves to leave, we were off to “The Bob” and finally got to see the Chinese Wall. We’re officially in the heart of grizzly country, y’all! 🐻
The sweet views continued all the way to Augusta!
Had an awesome birthday which I celebrated with my stinky, freeloading #hikertrash tramily, the wonderful people of Lincoln, and Daryl the Sasquatch. The hike from Rogers Pass was just as amazing as the hike into it after we hunkered down in a yurt to avoid the rain. More climbs, but a lot of ridge walking by rock ledges and towers.
No more smoke, but the days have been windy and the nights have been cold. We visited an amazing outfitter in the middle of the trail, got to see Golden, a familiar face from the AT (2016), and lots and lots of cows! I had been in a bit of a funk lately, but the ridge walk right before reaching Rogers Pass snapped me out of it!
Got stuck in the Butte vortex. We hitched in, hitched out, hiked to the north side then hitched back in. Pizza Ranch was our second home. Eventually we made our way to Helena, our second vortex. Before our arrival, we got pounded by hail and rain. The wind was blasting through the trees so hard, they were snapping like twigs behind us. The people of Helena were beyond hiker friendly. We got stuck a second day when a girl working at the brewery let us crash at her place for free, hot tub included! Life’s good!
The road walk continues. Nevada City to Twin Bridges to Silver Star to Butte! Time for a couple zero days!
Most of us had trouble getting the Big Sky Alternate maps, so we’ve been road walking. These things don’t bother me as much as most people. Road walks can be pretty fun! We’ve been bouncing town to town: West Yellowstone to Big Sky. Big Sky to Jeffers. Jeffers to Ennis. Ennis to Virginia City to Nevada City, and still rolling! Our end goal is to get to Butte, finally do some laundry, get showers (cuz we smell like sweaty buttholes), then return to the CDT to crush those last few hundred miles. It’s been fun making friends with the locals, and it’s also been more scenic than expected!
Posted on January 16, 2019January 18, 2019 by Stubbs

I don’t know what their big secret is, but the coffee in Thailand is incredible! Trevor got a Flat White and I got what they called a Magic at “Risr8to” back in the Nimman neighborhood.

We’d eat breakfast shortly after at the Bike Hotel before grabbing a tuk-tuk to the bus station to get tickets to Chiang Rai at 11:30. The Green bus we took provided Trevor with a defective seat that kept laying down on the poor man seated behind him, and my seatbelt was so sticky that I was afraid that I’d get trapped in my seat. 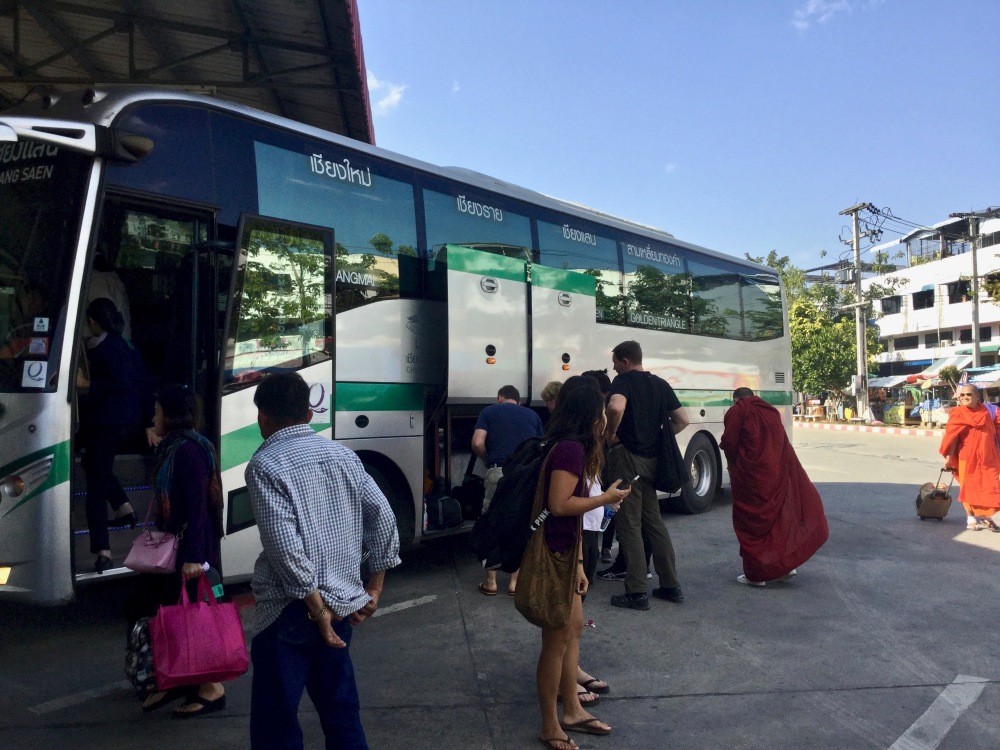 We tried napping on the way, but I was distracted by the scenery out the window. On occasion we’d pass by monasteries, rice fields, garden centers and there was a temple in the far distance perched on top of a mountain. The bus took the first rest stop and we hopped off for some corn chips and dried mangos to share. We made a few more stops to pick up and drop off the locals before arriving at our bus terminal at Station 2.

Before venturing off, we tried to get our bearings by using the WiFi at “Alexta Coffee” to figure out where we should hunt down a hostel. After enjoying more coffee and green tea, I went to use the restroom since we were planning on traveling by foot, but then I saw a sign next to a songthaew, or truck cab that said “15 Baht to Bus Station 1 (TOWN).” This was what we wanted. Trevor told the grumpy driver where we needed to go and we hopped in the back with a diverse mix of locals and tourists.

We ended up getting dropped off at some random spot and everyone we asked didn’t know where to find the hostel that we had taken a snapshot of. We wandered into a nearby tour guide shop and asked for help there. He told us it was far, and gave us a few other suggestions of places we could stay at nearby.

We ended up stumbling upon Mercy Hostel which was one of the places Trevor had looked up the day prior. He recalled that they only had dorm rooms available for tomorrow, but we went up there to ask anyway. We were in luck! There was a private room available so we took it! I was so happy to finally get some laundry done. I had grabbed body spray at the mall back in Chiang Mai because every time I opened my pack, I’d get a face full of BO. Did I mention that it’s hot as hell in Thailand? Perspiration is inevitable.

We were on a quest for vegetarian food. As much as I have heard that Thailand is very vegetarian friendly, we have had a lot of poor luck. Everywhere seemed to only have boring boiled vegetables or meat dishes. We walked by a very decorative clock tower and grabbed a beer at a restaurant nearby with an indecipherable name.

The clock across the street chimed for 7 pm followed by music and a light show. The whole thing lasted 10 minutes and was pretty damn cool! There was a place called “Chook Dee Guest House” which listed vegetarian options on their sign out front, unfortunately their kitchen had just closed, so we kept looking around. We giggled as we walked by a sign that said “Wangcome Hotel” and decided to give up.

When there’s no vegetarian food available, might as well go for a burger, right? There just so happened to be a food truck called “Sanfran Burgers & Beer” where we indulged in double cheeseburgers, beer and french fries.

The food was amazing in all its meaty glory! They played the type of jazz you’d hear in New Orleans which was kinda contradictory given their name hinted at a different US city, but who cares! Nola jazz will bring a smile to anyone’s face, especially when you’ve thrown in the towel on a vegetarian diet when you’ve secretly been craving meat all along!